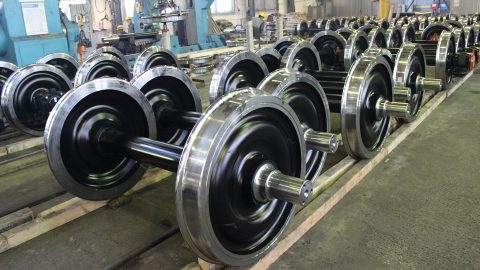 Ukrainian engineering company Interpipe has developed and certified the new type of rail wheelsets known as ULT SP. It was produced especially for the Spanish rail market where the Iberian gauge of 1,668 millimetres is used. The first batch of new wheelsets was shipped to Spain in early December.

“This year Interpipe had a task to enter a new market – Spain. If in France, Germany, Austria and other European countries we are competing with the European manufacturers, the Spanish market has been previously inaccessible to us due to the use of the Iberian gauge,” noted Alexander Garkavyi, Director of Interpipe Railway Products Division.

With the help of new wheelsets, Interpipe intends to strengthen its presence on the European rail market. Currently, its railway products are supplied to the European countries with a standard gauge of 1,435 millimetres. In 2018 the Ukrainian company manufactured 189,000 tonnes of railway products under the KLW brand. 22 per cent of them were exported to the European market. However, the home market and the former members of the Soviet Union have a more significant share in the company’s export – 30 and 39 per cent respectively. Interpipe also certified its products for the U.S. rail market. 3 per cent of the company’s rail wheels are supplied to the U.S.