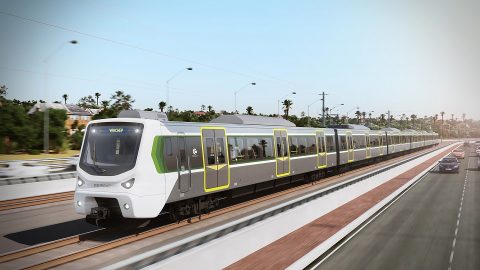 Alstom will deliver 41 electric trains and two diesel trains to Perth, Western Australia. The contract includes an option for an additional 30 electric multiple units. 50 per cent of the train parts will be produced in Western Australia.

Alstom has won a procurement process in August of this year. The relevant order for approximately 800 million euros has been concluded by the French manufacturer and the Public Transport Authority of Western Australia (PTA) on Tuesday, 10th December. According to the document, Alstom will design, manufacture, supply, test and enter service 41 six-carriage electric trains and 2 three-carriage diesel trains of C-series. The first vehicles should be commenced in 2022 while the entire order will be fulfilled within the seven-year period starting from that date.

All the C-series trains will be produced in PTA’s Bellevue assembly facility and will include 50 per cent of local content. 20 years maintenance of the electric trains and maintenance support services for the diesel trains will be also carried out in Western Australia or, more precisely, at PTA’s Nowergup depot. The maintenance service could be extended with a further two five-year options.

In order to meet these requirements, Alstom will transfer the latest railway technologies and manufacturing processes to Western Australia. Moreover, the French manufacturer will provide fast-tracked training and skills development programmes through dedicated partnerships with local TAFE and training organisations. This will allow creating a new generation of skilled railway manufacturing professionals. The project will create more than 120 Western Australian Jobs including 15 per cent apprentices and aboriginal workers.

Transperth rail network was launched in 1998. It comprises five lines with a total length of 181 kilometres. These routes connect Perth, the capital of Western Australia, to its suburbs and adjacent cities. The transport system is powered with 25-kilovolt overhead lines with alternating current. It is being planned to construct the 8.5-kilometre rail link to Perth Airport.