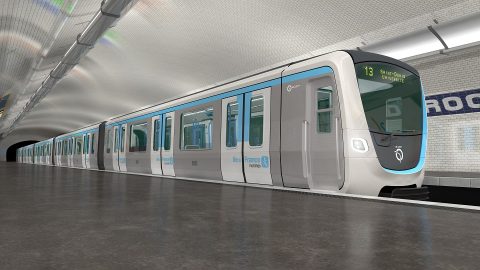 The consortium of Alstom and Bombardier Transportation has been chosen as a supplier of 44 new generation trains to Paris Metro. This number could be increased with several options up to 410 eco-designed trainsets. Between 2024 and 2026, the vehicles from the firm order will be introduced on three metro lines.

The new trainsets to be supplied by the Alstom-Bombardier consortium will be classified as MF19 type. Both manufacturers call them eco-designed vehicles. Their production includes the use of recycled materials at a rate of 20 per cent. At the end of their lifespan, the new generation trains could be recycled almost entirely (98 per cent). Owing to braking energy and LED lighting, the vehicles will consume 20 per cent less energy than MF77 trainsets widely used on the metro network. The firm order for 44 MF19 units costs over 530 million euros. It should be confirmed finally and contracted by an agreement with Île-de-France Mobilités and the Paris Transport Administration (RATP).

Originally, the MF19 trains will run on three lines of Paris Metro: 3bis, 7bis and 10. Afterwards, the vehicles to be ordered within the options will be introduced on five other routes: 13, 12, 3, 8 and 7. The MF19 type is based on Alstom’s and Bombardier’s steel-wheeled and manned metro solutions. They will benefit from the latest technological developments to increase comfort, availability, accessibility and passenger information, as well as facilitate maintenance.

The initial firm order includes 30 five-car trainsets with a length of 76 metres and 14 four-car trainsets with a length of 60 and 86 metres. RATP will operate the five-car units on Line 10 while the five-car vehicles will run on Line 7bis and 3bis respectively. Each trainset will be equipped with modern passenger information systems, large bay windows, a heating and air conditioning system, USB sockets for charging mobile devices, video protection cameras throughout the entire train and other features.