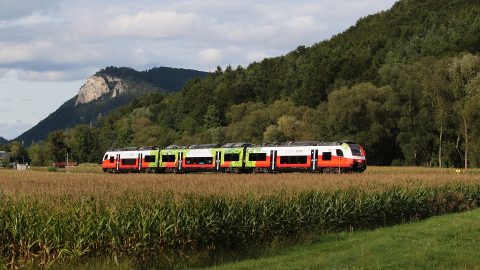 Austrian Federal Railways (ÖBB) has completed another stage in testing the Cityjet eco train. During a month, the company’s first hybrid vehicle was being examined on the regional routes in Upper Austria. Earlier, it was tested in Lower Austria. In both cases, the electric train equipped with batteries received positive feedback from passengers and proved its sufficiency on the regional lines.

ÖBB was testing the Cityjet eco train on the non-electrified routes in Upper Austria from the mid-October to the mid-November. During this period, the vehicle served several connections on three regional lines in Upper Austria: Donauuferbahn (between Linz and St. Nikola an der Donau), Almtalbahn (between Wels and Sattledt), Hausruckbahn (between Vöcklabruck and Schärding). The Austrian railway operator reported that the passengers gave positive feedback about the innovative multiple unit. “The Cityjet eco train is well received by passengers and is good for the environment. The test drives exceeded our expectations, and the passengers appreciate the comfort and modern look of the Cityjet eco,” said Andreas Matthä, CEO of ÖBB.

At that time, ÖBB also got a positive reaction of the passengers. Moreover, the company proved that the use of batteries is a good option for the non-electrified routes. Their energy is quite enough to provide rail service. For ÖBB, these results are important because a quarter of the entire network (around 1,300 kilometres of tracks) is non-electrified. With the help of the hybrid train, the railway intends to continue its environmentally-friendly policy and massively reduce greenhouse gas emissions.

The Cityjet eco train has been developed by Siemens Mobility. It is based on the Desiro train family. Since 2015 ÖBB is operating this type under the ‘Cityjet’ brand name. They run on the S-Bahn lines in Vienna and the regional routes across Austria. The hybrid version was produced by converting the conventional Cityjet electric train. It is equipped with the batteries installed on the roof. This solution allows the train to use the energy from the overhead wires on the electrified sections and the battery power on the non-electrified routes.