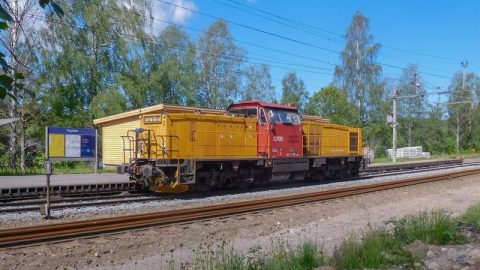 French technology company Alstom has equipped the first Norwegian locomotive with ETCS onboard system. The Di8 diesel vehicle of Vy railway operator will be used for testing ERTMS in Norway. In total, Alstom should provide ETCS for the entire Norwegian fleet by September 2026.

The first Norwegian locomotive was upgraded with new signalling solution at the Grorud workshop, close to Oslo. This improvement is a part of the Norwegian national programme aimed at deploying ERTMS in the country by 2034. According to the programme, the commence of ERTMS tests in Norway are scheduled for Spring 2020.

The serial installations of ETCS solution on trains and locomotives will start in 2021 while the first ETCS-equipped vehicles will enter service from 2022. The entire Norwegian fleet of 467 trains and locomotives belonged to 55 types and owned by 14 different operators will be covered with ETCS by 2026. Two Vy’s workshops, in Grorud and Marienborg, will be used for this purpose.

According to the deal concluded between Alstom and Bane NOR in June 2018, the French company will equip the Norwegian train fleet with the dual system. The latter is based on Alstom-developed Atlas ETCS onboard solution which is compatible with ERTMS Level 2. Meanwhile, the dual Alstom-deployed system will make it possible to operate the trains and locomotives on the legacy lines equipped with ATC-2 system. The design of this dual system minimises the hardware by allowing the trains to share some of the onboard components such as balise antennas, wheel sensors and certain safety systems.