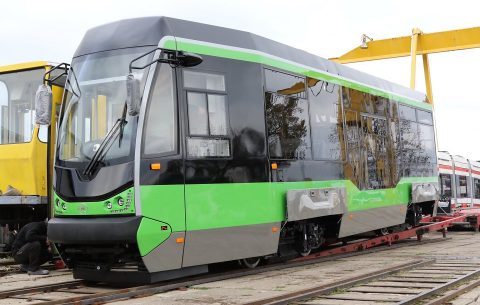 Polish manufacturer Modertrans Poznań has assembled the first one-car tram of Moderus Beta series. The partial low-floor vehicle was delivered to the city of Łódź for the homologation tests. For the regular service, this type will be introduced in the city of Elbląg in the first quarter of 2020.

The 14.5-meter unidirectional tram was classified as Moderus Beta MF 09 AC. It is the first shortened vehicle developed by Modertrans Poznań. At the moment, only one Polish city intends to use these new vehicles for regular service. In June 2017 Tramwaje Elbląskie, a tram operator in the city of Elbląg, ordered four one-car units with a seating capacity for carrying 28 passengers. They will be delivered in the first quarter of 2020. The fifth tram was purchased in August of this year. It will be supplied to Elbląg by the end of October 2021.

Since the end of the 2000s, the company is developing its own trams. Modertrans Poznań produces two types: Moderus Beta (three- or one-car units) and Moderus Gamma (three- or five-car units). The first type is being used by several Polish cities including Poznań, Szczecin, Katowice, Wrocław while the second one is being operated only in Poznań. Modertrans Poznań has manufactured over 150 trams since the end of the 2000s.