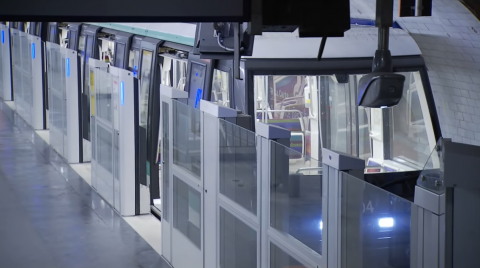 On the 19th of November during the Intelligent Rail Summit 2019 delegates will visit the driverless metro line 1, the oldest and most heavily frequented underground line in Paris. During this visit, an expert of Siemens Mobility will give more information about this Unattended Train Operation line (UTO) in Paris.

Line 1 links the east and west of the city along 17 kilometers of track. In 2006 Siemens was awarded a contract by transporting operator RATP to convert metro line 1 to fully driverless metro operation. Before that time, Siemens had already equipped Metro Lines 14 for driverless operation. The coming period line 14 will be modernised and extended and line 4 will be automated.

More than five million people use the Paris metro every day. In 2000 RATP decided to modernise the complete metro network. One of the changes that had to be made wase the automatisation of line 1. This was necessary because of the severe overcrowding. In 2013 725.000 passengers were daily transported on metro line 1. Driverless operation has increased the capacity with about 70.000 passengers. Also, punctuality has increased and the energy consumption is reduced by 15 per cent.

The Intelligent Rail Summit 2019 will take place on 19, 20 and 21 November in Paris. On the 19th of November there will be different technical visits. On the 20th of November the first conference day will concentrate on Automatic Train Operation. The 21st of November will cover experiences and latest innovations in the field of the Digital Railway.