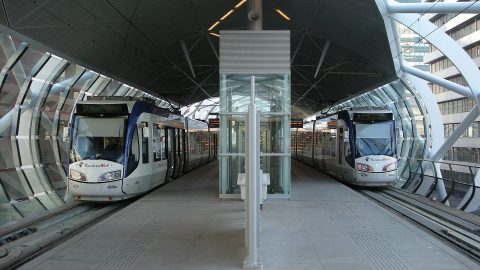 How ADAS can make light rail safer and greener

In the short term at least, it is more likely that we will see driverless metros than fully automatic trams in the Netherlands. Nevertheless, a lot of the same technologies can be applied to support tram drivers, making journeys safer and greener.

voestalpine Railpro discussed all the latest developments at a recent breakfast seminar for business relations in Hilversum, entitled ‘Lightrail, next step’. Patrick van Boxstaele explained what is possible with Advanced Driver Assistance Systems (ADAS). We know a number of these systems from the car industry, but for public transport there are a large number of specific add-ons.

With technologies such as blind spot detection and front collision warning systems, the advantages in terms of traffic safety are immediately apparent. And Driver Status Monitoring (DSM) has a lot of added value too. After all, if a tram driver is on the phone or falls asleep at the controls, this is hardly conducive to safety. DSM is only one of the options to monitor the driving behaviour of tram drivers. It is part of an integral monitoring system that voestalpine has put on the market under the name Green Driving System (GDS).

As the name suggests, the system is mainly aimed at green driving. This is not only about saving energy, but also reducing wear and tear on the tracks and the trams themselves. The system records the driving behaviour of the driver and compares this with the standard driving behaviour established for each route. The aim is that the driver keeps to the timetable and drives as energy efficiently as possible. To stop drivers having negative associations with the system, they can score points by getting as close to ideal driving behaviour as possible. Drivers are also given training beforehand so they can work well with the system and understand that the system works with incentives and penalties.

Via a web platform connected to the trams, it is possible to see who went too fast round a corner, who accelerated too quickly or indeed who drove too slowly to ensure punctuality. When there are serious deviations from the ideal, alarms go off both in the tram and on the web platform. Green driving also means using the right trams in the right place and at the right time. A linked passenger management system records how many passengers get on and off at each stop, which allows an analysis to be made of whether the number and length of trams fit with demand. If there are too many passengers, this has an enormous impact on the physical strain the tram is put under, as well as safety. With the system, a trigger line can be established, meaning that if the number of passengers exceeds the established maximum, an alarm goes off.

Safety on the tracks

Alongside saving energy and reducing wear and tear of the trams themselves, safety is an important part of the platform. According to Van Boxstaele, video and sensor observation mean lower operational costs, thanks to the evidence that is collected by the system. “95 per cent of accidents are caused by human factors, and 80 per cent of these are caused by a person being distracted in the three seconds before the accident occurred. With a system that warns people 4.5 seconds earlier, you can prevent a lot of accidents.”

Furthermore, the system also helps with public safety, such as by detecting or recording vandalism, aggression against staff or terrorism. Using cameras, both people and luggage can be monitored. For example, it can be seen whether the tram is completely empty after the last stop. Facial recognition with cameras is possible, and this data can be shared automatically with the authorities. “In Asia this technology is already being used on a modest scale, but options are more limited in the Netherlands because of tougher privacy laws.”

The technical possibilities seem unlimited and the objectives are good, but Boxstaele acknowledges that the human factor must also be considered. For example, tram personnel must be convinced of the system’s benefits. “It’s crucial that not only passenger privacy but also staff privacy is guaranteed. Though Driver Status Monitoring films the tram drivers, it doesn’t mean that someone is watching them throughout the day. In fact, video images are only looked at if an accident has taken place. Besides, the person monitoring the web platform only sees the raw data: the figures that the system allocates to what it sees. So, over time, tram drivers will also see the benefits of such a system. For example, thanks to good monitoring and recording, they can no longer be on the end of unfounded accusations.”

The breakfast seminar, which was attended by about 50 people, tackled a broad range of subjects directly or indirectly connected to light rail. For instance, rail lubrication systems do not have any direct impact on driving safety, public safety or energy usage, but they can prevent noise pollution for those who live near tram tracks, and also reduce wear and tear. Jan Hütker from Moklansa, a German supplier of rail lubrication systems, came to the seminar to explain more about tackling noise caused by wheel-rail contact. Through the increasing weight of rolling stock, more intensive use of the tracks and longer trains, there are a growing number of complaints about noise.

According to Hütker, one third of the costs to combat wear and tear are spent on the wheels and two thirds on the rails. Besides naming the various lubrication systems and their advantages and disadvantages, Hütker talked in depth about the different noises that trams can produce. In particular, he explained that the screeching of wheels on bends can be prevented by a lubrication system on the track. “But it needs to be in the right place, and the right amount of lubricant needs to be used. That’s why extensive research must be carried out as a first step.”

The breakfast seminar was rounded off with a presentation from Koen Melis from Castlab, a start-up that won an Innovation Award at RailTech 2019 in Utrecht. Castlab combines centuries-old and hyper-modern technologies to produce made-to-order train parts that are difficult or impossible to source from elsewhere. SpoorPro visited Castlab earlier this year.