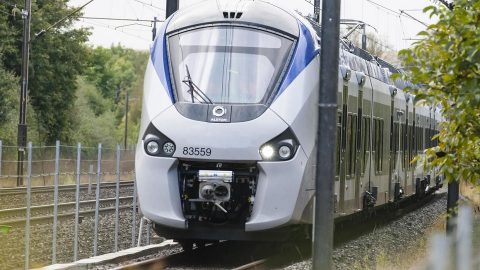 The French region of Grand Est has ordered a new batch of Coradia Polyvalent trains from Alstom. It consists of 39 vehicles, 30 of them will be used by SNCF for cross-border operations to the nearby German states of Saarland, Rhineland-Palatinate and Baden-Württemberg. The France-Germany link will be the second cross-border service of the Coradia Polyvalent trains after Léman Express to be launched between France and Switzerland in mid-December 2019.

After booking 40 Coradia Polyvalent trains, the Grand Est region ordered 39 additional units of the same type. The order is valued at around 360 million euros and includes trains of three specifications. 30 Coradia Polyvalent trains will be dual-system to be operated on both 25-kilovolt and 15-kilovolt networks used in France and Germany respectively. These vehicles will consist of four cars with a first-class zone and an area for bicycles, they will be adapted for the passengers with reduced mobility and comply with German safety requirements. The first cross-border trains will be supplied at the end of 2023.

Two other specifications are dedicated to the domestic service. To this end, Alstom will supply five four-car and four six-car trains. These new trains will benefit from the same special features as those already in operation in the Grand Est region. All the trains ordered by the Grand Est region will be able to run at 160 kilometres per hour. They will be entered regular service from 2022 to 2024.

Coradia Polyvalent is a part of Coradia train family being developed by Alstom since the early 2000s. These trains are widely used by SNCF on the suburban, regional and intercity services. Coradia Polyvalent is the first French regional train to comply with all European standards, in particular with regard to access for people with reduced mobility. As of today, 387 Coradia Polyvalent trains have been ordered within the deal concluded between Alstom and SNCF in October 2009. Besides SNCF, this type has been booked by two foreign railway operators. Thus, Algerian company SNTF ordered 17 trains and Senegalese counterpart APIX purchased 15 vehicles.