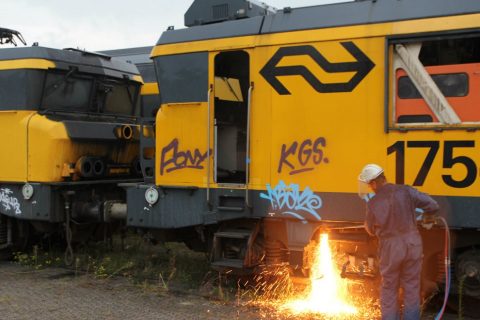 From locomotive to scrap in 36 hours

Waste processing firm Beelen is working on the disassembly of 35 locomotives from the 1700 series previously operated by Nederlandse Spoorwegen (NS). On average, four locomotives per week are made into scrap. This involves all materials being separated. The goal is to recycle 97 per cent of the locomotive parts.

Most locomotives from the 1700 series have been in service for almost thirty years. A small number are still being used by NS, but the majority have already been out of action for a number of years. As it has proved impossible to find buyers for them, they are now being scrapped. “Since these locomotives operate on 1800 volts, they are only really of use in the Netherlands. The few that have been sold are still being used in this country. Conversion is too costly and there is no interest from abroad”, explains Ton Assendelft, Head of On-Call Technical Services at NS. 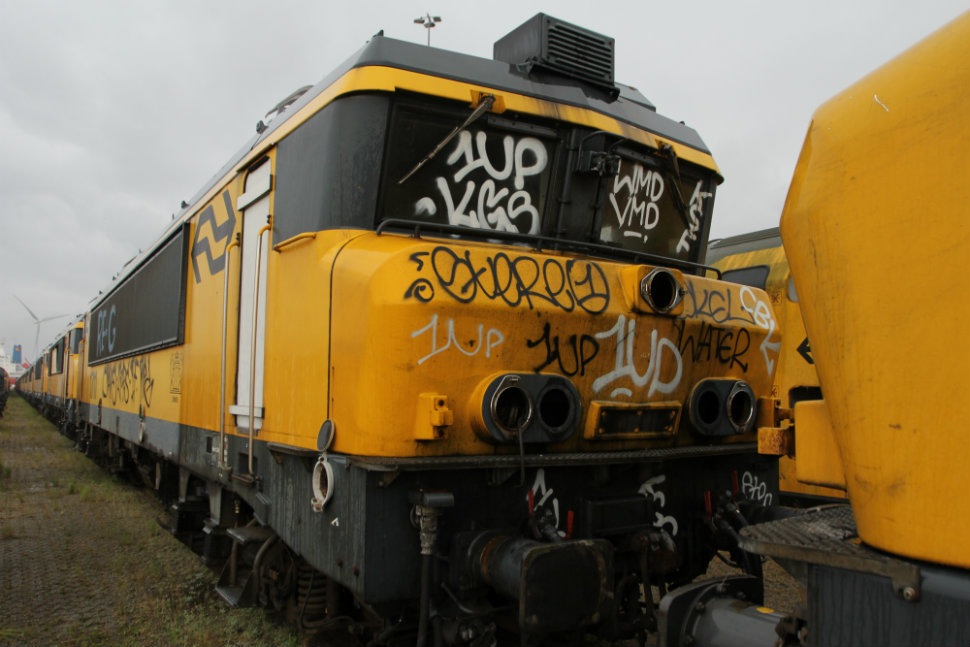 Although the work has been outsourced to Beelen, NS has been closely following the whole dismantling process. One reason for this is because of the interim legal steps that must be carried out: from the moment that the locomotive is officially declared as ‘not trackworthy’ to the forms that must be signed when the locomotive is sent to the metal processor in three parts. “The work has been outsourced to and is being carried out by Beelen, but until all harmful materials have been removed, the trains remain the property of NS. Furthermore, our name is on the trains, and because of the colours and logo they are clearly recognisable as ours. Should something happen, the media and the public would associate it with us and would want to discuss it with us. That’s why we want to know exactly what is happening, and when.” 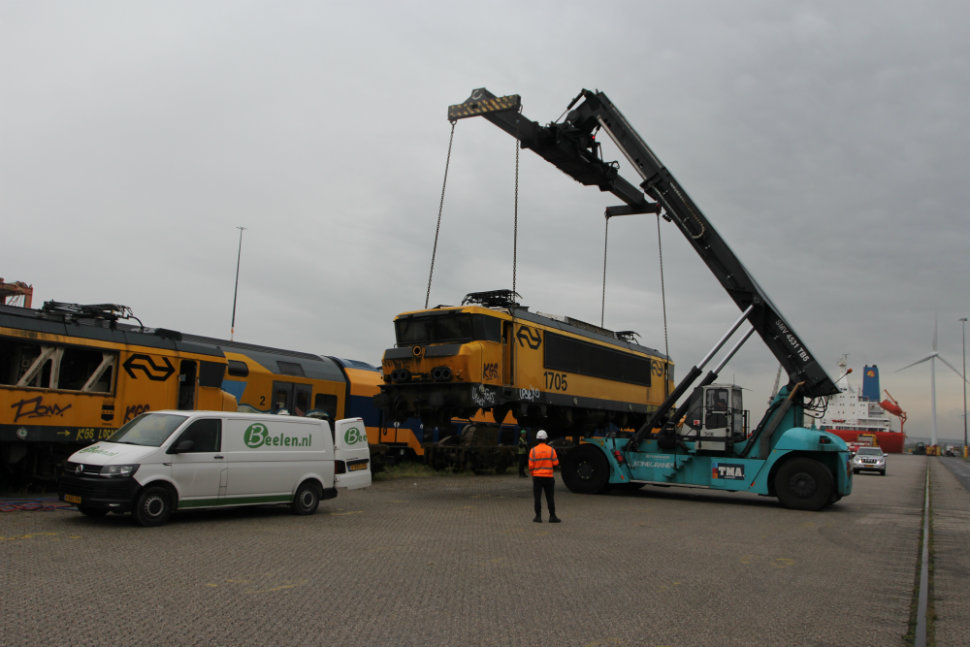 Locomotives from across the Netherlands that can be scrapped are taken to Amsterdam, where they are placed in two rows in the grounds of container company TMA Logistics, in the Westelijk Havengebied. By then, the 600 litres of oil have been emptied from the oil tanks in one of the various NS workshops, the 2 tonnes of braking sand have been sucked out and returned to the original supplier for reuse, and the air conditioning units on the roof have been emptied. Furthermore, other parts that can be used to keep other trains running have already been ‘plucked off’ before these trains begin their final journey. 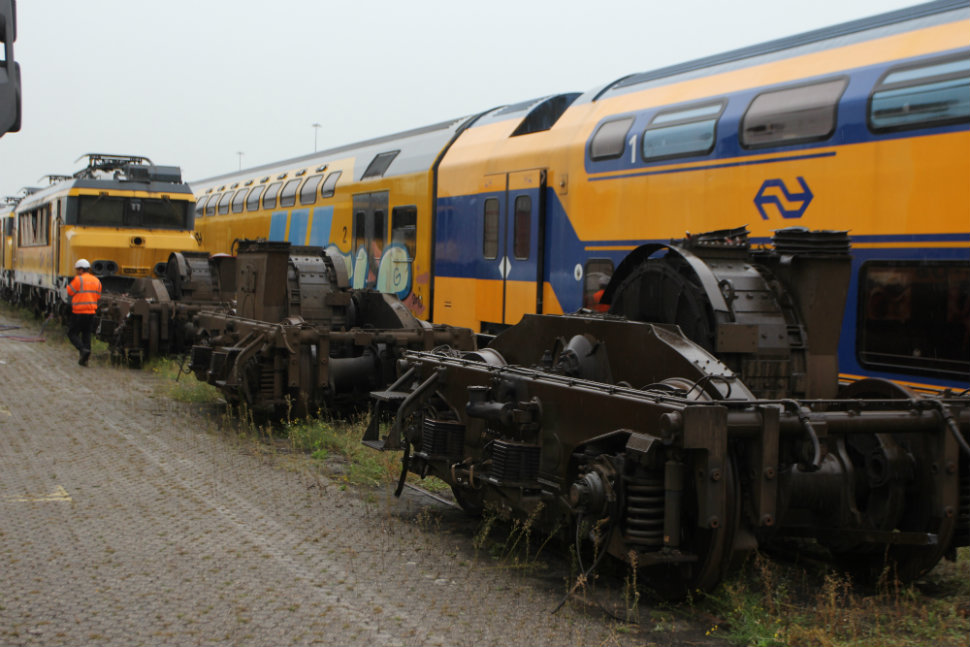 Train on the road

As none of these locomotives is still trackworthy, they are bought to Amsterdam by Volkerrail. One rainy day we got to watch how the dismantling process takes place at close quarters. Firstly, the connection between the bogies and the car is cut with a cutting torch. The wiring stays where it is. Then a reach truck hoists the car off the bogies, and the cables are pulled apart in the process. Next, the car and bogies are taken separately by lorry to a nearby metal processing company. On these journeys, great care must be taken because of the many traffic light mast arms and street lights that hang above the roads. It is certainly an unusual sight to witness a train weaving down the streets of Amsterdam’s suburbs and industrial estates. 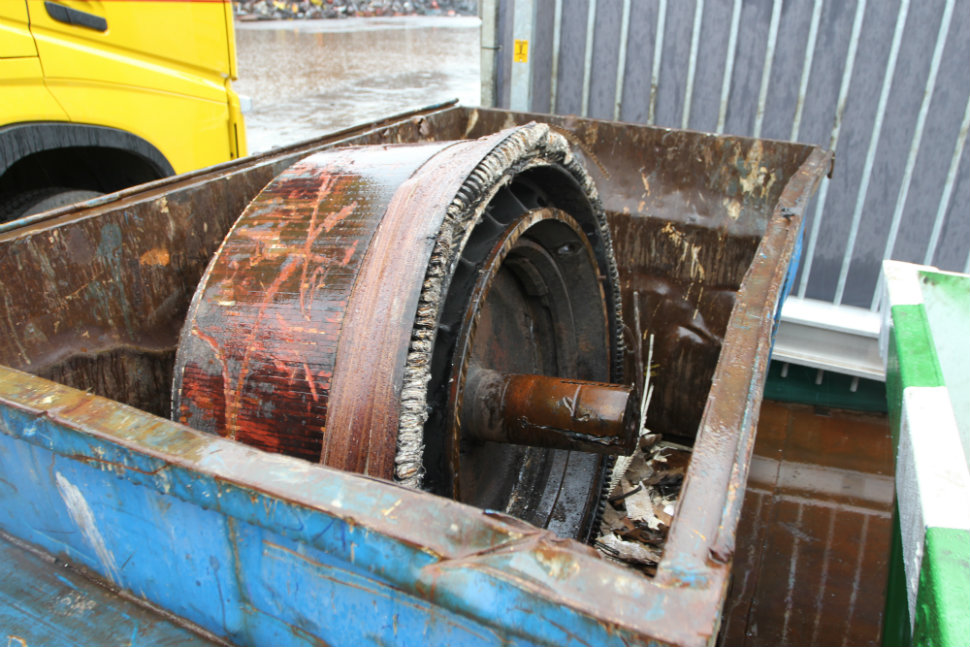 At the metal company, Beelen has set up a special corner for a team of five people who work exclusively on the locomotives that have just arrived. They are not put off by the fact that the dismantling takes place outside and it is pouring with raining. “It is better than it being warm and dry, as then you need to spray to prevent dust. Now you don’t need to do that”, says foreman Thorsten. First, the aluminium roof is removed and the plating is cut off. Then comes the inside. The many copper parts such as switches, relays and cables are carefully removed, as the metal is valuable. The wooden floors, insulation material, wall covers and windows are also taken out. Slowly all that remains of the approx. 40 tonnes of a train car is the steel framework. Once this framework has been cut into manageable pieces, these can go onto the large pile with the other scrap metal. This is ready for recycling, and perhaps destined to become a new locomotive or track. 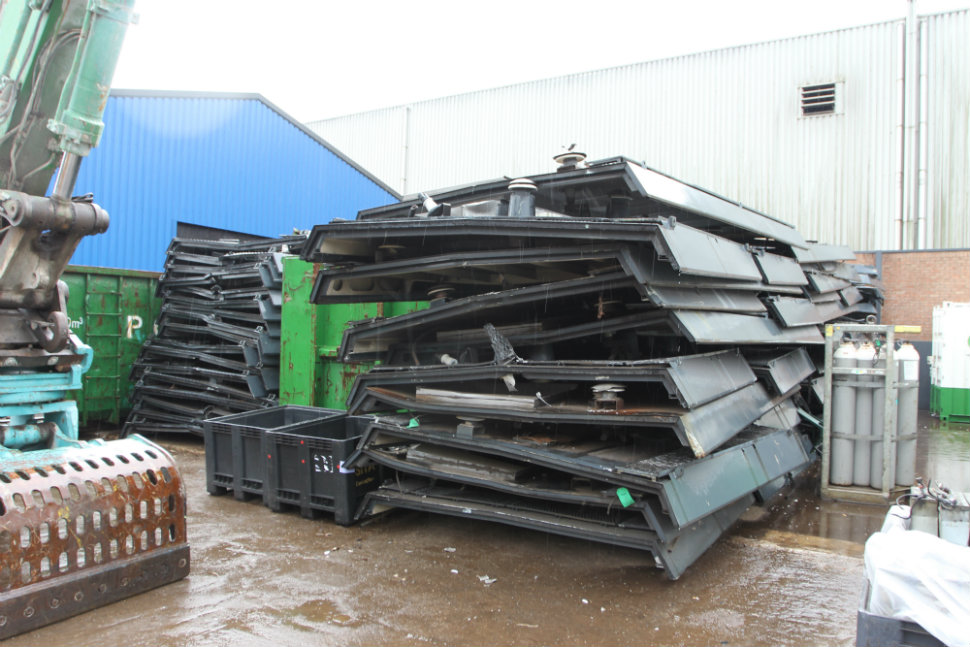 The two bogies, each weighing 22 tonnes, are processed separately. The majority of a bogie is made of steel, including the wheels, shock absorbers and chassis. Cutting and shaping this down to manageable, processable pieces would be enough, were it not for the very heavy electric motors that also need to be removed. There is also a lot of copper between the steel elements, and that has to be carefully separated. So that is why dismantling the bogies is the most time-consuming part of the process. At the end of the week, when every piece of material is in the right container or on the right pile, four locomotives have been taken apart. There are still twenty five to go (until now, six have been dismantled), after which a number of first generation DDM double-deckers will be scrapped. These will also end up at TMA Logistics’ container terminal. 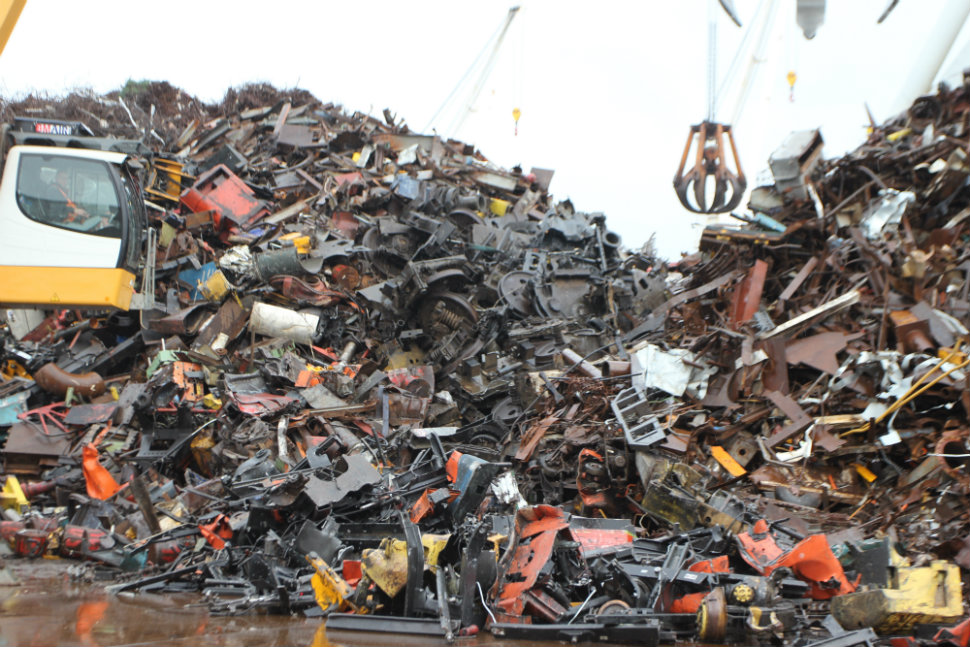 All photos are shot by Paul van den Bogaard. The full photo report is available here.