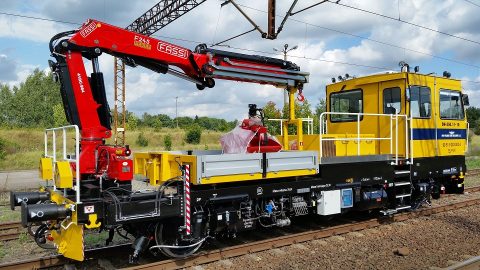 Polish railway infrastructure manager PKP PLK continues renovation of its fleet. It has already introduced 22 new track motorcars for maintenance works on the country’s railway network. Six more vehicles will be purchased in the coming months. The number of the ordered track motorcars will increase up to 47 units.

PKP Polskie Linie Kolejowe (PKP PLK) uses the track motorcars for the maintenance works including transportation of rails, sleepers, equipment and staff to the work sites. The vehicles are equipped with special cranes for handling equipment and capable to run at a speed of up to 100 kilometres per hour.

By this date, PKP PLK has ordered 41 track motorcars valued at over 217 million Zlotys (circa 50 million Euros). Six vehicles to be purchased in the coming months will be operated by the divisions of PKP PLK in Białystok, Siedlce, Skarżysko Kamienna, Wałbrzych, Ostrów Wielkopolski and Nowy Sącz. All 47 track motorcars cost 250 million Zlotys (over 57 million Euros), they will be entered into service by the end of 2021.

Besides track motorcars, PKP PLK also purchases new tamping machines. In January it ordered three tamping machines from the Austrian supplier Plasser & Theurer for more than 81 million Zlotys (around 19 million Euros). The manufacturer will produce and deliver to Poland two vehicles of type 09-3X Tamping Express and one vehicle of type Unimat 09-4×4/4S Dynamic. PKP PLK will use these machines to regulate the location of tracks and switches in order to improve safety and increase the train speed on the country’s railway network. The procurements of track motorcars and tamping machines are mostly financed from the EU funds. In September 2018 PKP PLK received 212 million Zlotys (over 49 million Euros) to purchase new maintenance fleet.