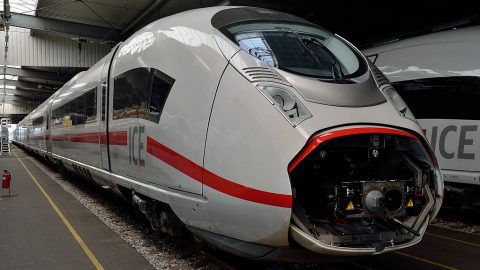 French technology company Alstom will upgrade 17 ICE3 high-speed trains with its Atlas ETCS onboard system. The vehicles are operated by Deutsche Bahn on both domestic and international routes. The deal costs over 30 million Euros.

Alstom will install the European Train Control System (ETCS) according to the TSI version of Baseline 3 Release 2. The French company will develop, design, manufacture the new solution and integrate it with the existing national protection systems. The retrofitted trains will be homologated for operations in Germany as well as on cross-border routes to Switzerland, Belgium and France. Also, the new technology will allow the medium-term operational start of the trains to be equipped for the new German ETCS Level 2 high-speed line between Stuttgart and Ulm.

Alstom will perform the order at its several locations: Berlin (project management), Salzgitter and Braunschweig (installation design and rebuilding), Charleroi, Belgium (design and engineering), Paris and Villeurbanne, France (product development and manufacturing). The ETCS installation and the commissioning will take place at Alstom‘s sites in Salzgitter and Braunschweig in Germany. Moreover, Alstom will provide the service maintenance of the control and signalling technologies during the six-year period.

Deutsche Bahn is operating ICE3 high-speed trains since 2000. This family includes three classes of trains: 403 (50 trainsets), 406 (17 trainsets) and 407 (17 trainsets). The deal with Alstom covers the modernisation of Class 407. It was introduced on the German network in December 2013. All the types were developed and manufactured by Siemens Mobility. The German rolling stock supplier classifies the ICE3 trains as Velaro. Besides Deutsche Bahn, these vehicles are operated by RENFE (Spain), China Railway, Russian Railways, Eurostar, Turkish State Railways.