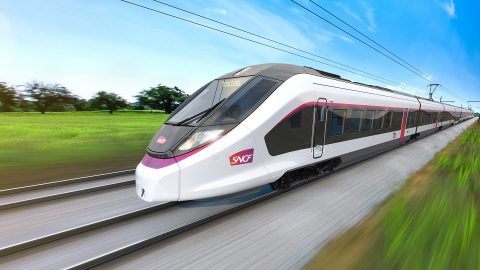 Spanish company CAF has been chosen as a supplier of 28 intercity trains to the French railway operator SNCF Mobilités. They are valued at 700 million Euros and will serve the Paris – Clermont-Ferrand and Paris – Limoges – Toulouse lines. SNCF may also order an additional batch of up to 75 trains. 15 of them will run between Bordeaux and Marseille.

The decision to award CAF with the contract was made by the Steering Committee comprised of SNCF Mobilités and the State (Directorate General of Infrastructures, Transport and the Sea) on 17 September. After reviewing the bids, the CAF’s proposal was supported as the one with the highest score. The final conclusion for the train purchase will be validated by SNCF Mobilités’ Board of Directors on 24 October 2019.

These new trains will be introduced into regular service in 2023. They will be able to run at a maximum speed of 200 kilometres per hour. To provide high standards of comfort for the passengers, CAF will equip the vehicles with ergonomic seats, Wi-Fi, power sockets and USB ports, stowage for 10 bicycles, galleys for high-quality cart catering and an autonomous access for passengers with reduced mobility both from platforms and inside the train. The new trains will gradually replace Corail coaches and their locomotives, some of which are in operation over 40 years old.

CAF intends to produce these Intercity trains at two facilities: Bagnères-de-Bigorre in the Hautes Pyrenees, France, and Beasain in the Basque Country, Spain. To fulfil the order, the Spanish manufacturer will develop its French facility that was taken over in 2008. First, CAF will hire 250 additional employees to be engaged in the project. Also, the company will construct new workshops with a total area of 11,000 square metres. In general, the Spanish company plans to invest in its French facility 30 million Euros.