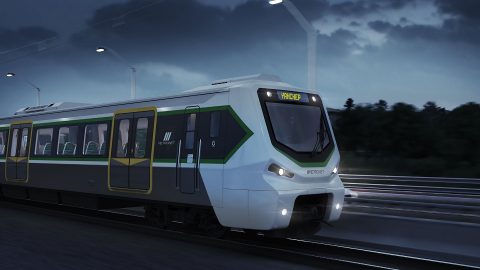 Western Australian government agency Metronet has ordered 41 C-series electric trains from Alstom. They will be operated on the commuter routes in Perth and its environs. The final agreement will be concluded by late 2019. The first trainsets will be rolled out in 2022.

The C-Series trains will be based on the X’Trapolis Mega electric multiple units. 41 six-car vehicles will have a total capacity for carrying 1,200 passengers. They will be equipped with regenerative braking, USB charging points, LED lighting and other technologies. Alstom guarantees the 35-year lifespan for these vehicles. Metronet invested 1.6 billion Australian Dollars (978 million Euros) in the train order.

Made in Western Australia

Alstom will deliver the entire batch of the six-car vehicles in a ten-year period since the contract signing. The C-Series trains will be manufactured of 50 per cent local content made in Western Australia. To achieve this goal, the French company intends to build the assembly plant in Bellevue, an eastern suburb of Perth. The construction works will start next year and be accomplished in 2021. According to estimations, this will create more than 200 direct and long-term jobs, and hundreds of additional indirect jobs in the Australian state.

The first C-Series trains will be introduced into service in 2022 on the Mandurah and Joondalup Lines of the Transperth network. They will partially replace the existing A-Series trains and increase the fleet capacity to serve the future extensions including the Forrestfield-Airport Link. For that reason, Metronet needs 60 new train drivers. The government agency has already announced a new round of recruitment. The future personnel must complete a 25-week paid training period: 11 weeks in the classroom learning and 14 weeks of on-the-job training in the railcar with a driver trainer.

The Transperth rail network has a total length of 181 kilometres and includes five routes connecting Perth, the capital of Western Australia, with its environs. The commuter system is powered with 25-kilovolt overhead lines with alternating current. Currently, two types of electric trains serve the network. 48 two-car A-Series vehicles were manufactured by ABB and Adtranz (now is a part of Bombardier Transportation) in 1991-1999. The second type is the B-Series trains produced by Bombardier Transportation in 2004-2019. The Canadian company delivered to Perth 78 three-car vehicles of this type.