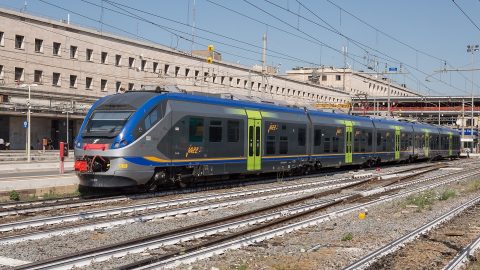 Italy’s state-owned rail operator Trenitalia has launched the procurement process for the purchase of 250 electric multiple units. The overall cost of the trains is circa 2.7 billion Euros. 250 single-deck vehicles will be used for the Trenitalia’s regional service across the country.

The procurement consists of two lots. The first batch costs 1.071 billion Euros and includes an order of 150 trains being able to run at a maximum speed of 160 kilometres. 38 units will be the minimum guaranteed order, 19 of which will be booked when the framework agreement is concluded. The remaining 112 trains are an option that could be purchased later. Lot 2 costs 1.621 billion Euros. It includes a minimum order for 22 trains and an option for 78 trains with a maximum speed of 200 kilometres per hour. Both lots provide the separate framework agreements for 15-year full-service maintenance with an option for a 10-year extension.

In recent years, Trenitalia has already purchased several batches of new electric trains for its regional service. All of them were classified after the music styles: Jazz, Rock, Pop. In 2012 the operator ordered 136 Coradia vehicles from Alstom. They were delivered in 2014-2019 and named as Jazz trains. Now, this type of rolling stock is running 11 Italian regions, from Trentino to Sicily. In 2016 Trenitalia concluded an agreement with Hitachi Rail for supply 300 Rock double-deck trains with a firm order for 39 units. Afterwards, the firm order was increased up to 118 units. The first Rock train was entered into service in June. Also, in 2016 the Italian rail operator ordered from Alstom 150 Pop trains which are belonged to the Coradia Stream range. The first three units of this type started regular running in June.