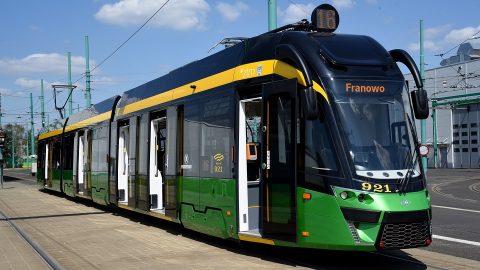 The public transport operator MPK Poznań has introduced into service the Moderus Gamma LF03AC BD tram. It is a new type of the bidirectional low-floor vehicle manufactured by Modertrans Poznań, the operator’s subsidiary focused on the tram producing and maintenance. 19 other trams of this type will be delivered to MPK Poznań by the year’s end.

The new tram of the Moderus Gamma family was demonstrated in Poznan on 25 July. A week later, on 2 August, it was entered into regular service. The vehicle runs on Line 16 connecting the Jan III Sobieski neighbourhood in the northern part of Poznan with the housing estates located in the southeastern part of the city. The three-sectional tram is capable to carry 233 passengers including 48 seated. It was equipped with air-conditioning, a dynamic passenger information system, advertising monitors and USB chargers. There are also areas for wheelchairs and prams as well as a for bicycles.

The Moderus Gamma trams are the family of the low-floor light rail vehicles developed by Modertrans Poznań. Its first prototype, Moderus Gamma LF 01 AC, was unveiled in November 2016. MPK Poznań started to operate it in May 2017. The vehicle was transferred to Gdansk where it runs until the end of 2017. In May 2018 this tram was returned to Poznan, it is still in operation.

In February 2017 MPK Poznań concluded an agreement with Modertrans Poznań for the delivery of 50 low-floor trams including 30 unidirectional (LF 02 AC type) and 20 bidirectional units (LF03AC BD type). The order costs 397 million Zlotys (around 92 million Euros). The unidirectional vehicles were supplied from October 2018 to July 2019. After the delivery of 50 Moderus Gamma vehicles, MPK Poznań will operate 229 trams, 75 per cent of them will be low-floor. The public transport company also plans to retire 42 old trams currently used on city routes.

Modertrans Poznań was incorporated as a municipal company and subsidiary of MPK Poznań specialised in tram and bus maintenance. Initially, the company was focused on the modernisation of old trams for MPK Poznań and the transport operators from the other Polish cities (Katowice agglomeration, Szczecin, Gdansk, Elbląg, Wrocław). At the end of the 2000s, Modertrans Poznań started to develop its own tram named as Moderus Gamma. The company’s manufacturing facilities are located in Poznan (for trams) and Biskupice (for buses), 20 kilometres northeast from Poznan.