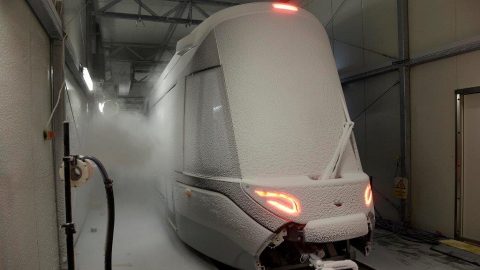 New Urbos tram from Amsterdam under climate tests in Germany

The Amsterdam public transport company GVB has dispatched a new Urbos tram for the climate tests. All systems and functionalities of the vehicle are being examined in the extreme weather conditions. The trials are taking place in a special climate chamber located in Minden, Germany.

The climate tests are obligatory for entering the new type of a tram into service. Inside the climate chamber, the vehicle could be examined in the extreme conditions from -25 to +45 degrees Celsius. However, the weather in the Netherlands is not so extreme, therefore, the trials are going in the temperature range from -20 to +35 degrees Celsius.

GVB is testing only one Urbos vehicle classified in the Netherlands as the 15G type. “It is a so-called type test, so we test one vehicle. If everything is found to be in order, we can trust that the other 62 new 15G trams also work well because they are built in exactly the same way by manufacturer CAF. So they don’t have to go into the climate chamber separately,” the technical manager of the 15G project Martin Slippens specified.

GVB has started the climate tests with the examination of the heating, ventilation, air conditioning systems (HVAC) of the Urbos tram. “We are testing these systems for their performance. They must be able to reach a pleasant temperature in the passenger compartment and in the cabin, but they must also reach it within a not too long time,” Martin Slippens noted. According to him, the public transport operator has already tested the work of the fans. During the trials, the experts also measure energy consumption.

In 2016 GVB ordered 63 five-section low-floor bidirectional trams from Spanish rolling stock manufacturer CAF. The first Urbos tram was delivered to Amsterdam at the end of April. The entire order should be completed by 2022. GVB classified this type as the 15G series. Each tram has a capacity for carrying 175 passengers, including 50 seated. The agreement between GVB and CAF includes an option for 60 additional vehicles.