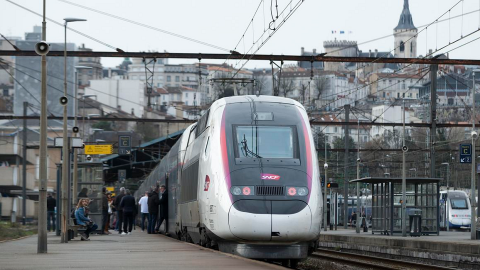 French rail operator SNCF has ordered a new batch of the TGV high-speed double-decker trains from Alstom. The manufacturer will supply 12 ten-car Avelia Euroduplex sets for the sum of 335 million Euros. These trains will be entered into service in 2021-2022.

SNCF will use the new trains on the Atlantique high-speed line that connects Paris with Western France. The ordered vehicles will replace the old rolling stock running on the route for over 30 years. “This order is excellent news for the sites that produce these trains and will, in particular, ensure the workload of La Rochelle and Belfort in 2020 and 2021, before the delivery of the new generation trains ordered in 2018,” said Jean-Baptiste Eyméoud, Senior Vice President France at Alstom. It is the third batch of the Avelia Euroduplex trains ordered by SNCF within the last six years: in September 2013 the rail operator booked 40 units, other 15 vehicles were ordered in March 2017. Alstom has already supplied 41 trains.

The Avelia Euroduplex trains are the third generation of the TGV double-decker units operated by SNCF. They have a higher capacity of 556 seats compared to 509 for previous generations. These trains are featured with a new concept for more comfortable, more ergonomic seats with a high level of equipment (electrical sockets, USB sockets, reading lamp, etc.). Alstom also equipped the seats in the first class with an innovative system. The latter allows the passenger to rotate a seat for 180 degrees in order to always face the direction of travel. The trains also offer greater accessibility for passengers with reduced mobility.

“The production of these Avelia Euroduplex trains will represent employment for 400 people in La Rochelle and 120 people in Belfort,” noted Jean-Baptiste Eyméoud. According to him, eight of Alstom’s 13 sites in France are involved in its design and manufacture of these trains: La Rochelle for the design and assembly, Belfort for the power cars, Ornans for the engines, Le Creusot for the bogies, Tarbes for the traction chains, Villeurbanne for the onboard computerised systems, Petit-Quevilly for the traction transformers and Saint-Ouen for the design.