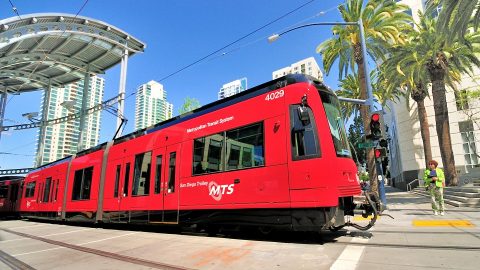 TriMet and MTS, the public transport providers in the metropolitan areas of Portland and San Diego have ordered 51 new trams from Siemens Mobility. The S700 low-floor vehicles will replace the old types of rolling stock still running in the cities. The delivery of new trams is scheduled for 2021.

TriMet transport agency that operates the public transport in the Greater Portland, Oregon, has ordered 26 new trams of the S700 type. The contract provides an option for an additional 60 units to be used on the future extensions. With the help of new vehicles, TriMet will complete the replacing of the old Type-1 Bombardier-made trams running on the city routes since 1986. After the retiring, this type, the Portland’s transport company will use only the Siemens-made rolling stock.

The other 25 vehicles were booked by San Diego’s Metropolitan Transit System (MTS). They will also replace the old rolling stock running in the city: the S700 low-floor trams will substitute the SD100 high-floor units. The latter type was also produced by Siemens Mobility in 1995. This deal is a part of the company’s strategy to make its tram fleet fully low-floor and accessible. “The standards and expectations for public transit continue to change and we are committed to meeting the needs of our current and future riders,” CEO of MTS Paul Jablonski said.

The S700 trams are based on the S70 low-floor vehicle platform widely popular across the US. The vehicles of this tram family are producing at the Siemens facility in Sacramento, California. They have an open and spacious low-floor interior. The wide aisleway makes the vehicle much easier to traverse into and around for passengers, bicycles and wheelchairs. There are also energy efficiency features like LED lighting, which not only utilize less energy but also last longer. “These new vehicles also are a critical part of our making transit better efforts and will make the light rail system more efficient and more reliable for our customers,” TriMet General Manager Doug Kelsey noted.

Siemens Mobility has a long-term relationship with both TriMet (for more than 20 years) and MTS (for almost 40 years). The Portland’s transport company operates 79 vehicles of the SD660 type and 40 vehicles of the S70 type. “For more than 20 years, our relationship with TriMet has continued to grow as we have co-created their fleets. From first developing their Type 2 fleet – North America’s first low-floor light rail vehicles – to today’s S700 low-floor vehicles, we are working together to ensure that Portland’s passengers have sustainable, efficient and enjoyable commutes,” CEO of Siemens Mobility Sabrina Soussan said.

The cooperation between Siemens Mobility and MTS began in 1980 with an order for 71 trams of the U2 high-floor type (currently retired). The San Diego’s transport company operates 177 trams. All of them were made by Siemens at its facility in Florin, California. The MTS fleet consists of two tram platforms – SD100 and S70. Besides Portland and San Diego, the Siemens-made trams run in approximately 30 cities in USA and Canada. The manufacturer is the market leader for light rail vehicles in North America with more than 1,800 units ordered.