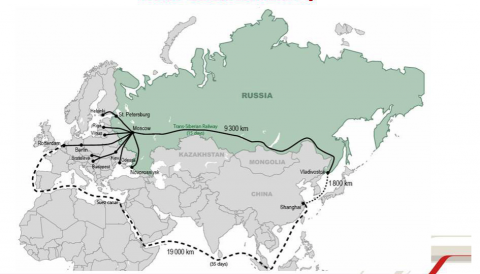 RailFreight.com organises a free webinar on the transit of European products by rail through Russia. Formally, this transit traffic is permitted per 1 July, implying the opening up of a large market of trade between Europe and China. However, the rules remain complex.

On Friday 19 July the Silk Road Webinar: Russian Ban Lifted takes place. It starts off at 11 AM CEST. On table are Sebastiaan Bennink from Wladimiroff Lawyers, Hanno Reeser from New Silkway Logistics and Ton van den Hanenberg from the University of Applied Sciences in Rotterdam. The three specialists will delve into the topic for an hour, with plenty of opportunity for questions from the digital audience.

The transit of the food and agricultural products through Russia from Europe as well as the US, Canada, Australia and Norway has been banned since August 2014. This has had a great impact on rail freight traffic specifically between Europe and Asia, as Russia is one of the main transit countries on the New Silk Road. Until now, these products could only be transported to China via routes bypassing Russia, resulting in much longer transit times.

Last month the Russian government announced the signing of a decree, which lifts the much anticipated ban. Per 1 July the transit of these type of products is permitted, albeit under certain conditions. It concerns transit traffic only, and trains should be traceable during the entire journey across the country.

Although the rules have been in effect for more than a week, the response from the market has been hesitant. There is still a lot of confusion among companies as to how the conditions should be met, or if the measures are really adopted. However, what is certain is that it will lead to a breakthrough, as the demand in China for European food and agriculture products is huge.

Only because of this last factor RailFreight has organised this webinar. Hanno Reeser is keen to explain what the new rules mean for his business, while as an academic, Ton van den Hanenberg has a good overview on the range of products this concerns. Earlier, he carried out research into the affected products and their potential markets.

Last but not least, Sebastiaan Bennink will do his utmost best to explain the implications of the decree. This is not an easy task, as the precise implications are not yet understood by most of the people involved. As a lawyer, he is however capable of analysing the text of the decree and explain the conditions as they are formally set.

Send in your question

Do you have a question about this important development? Of course you can interact with the speakers during the webinar, but it is also possible to send in your questions ahead of time. You can send in your input on the following web page: https://www.railfreight.com/webinar/

Registration for this webinar is still open.