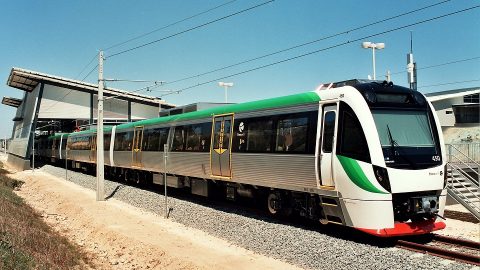 Bombardier Transportation has completed the delivery of 78 three-car electric trains for Transperth network in Western Australia. The manufacturer has been also providing fleet maintenance in the last 15 years and will continue to do it until 2026.

Bombardier Transportation was producing the trains for Transperth system at its Australian facility in Dandenong, Victoria. The vehicles were classified as B-Series and became the most numerous type of rolling stock using on the network. The first B-Series electric multiple units were entered into service in 2004. To maintain these trains, Bombardier concluded a partnership with an Australian engineering company Downer EDI.

Transperth rail network was opened in 1998. It consists of five lines that connect Perth, the capital of Western Australia, with its suburbs and adjacent cities. The system of 72 stations is powered with 25-kilovolt overhead lines with alternating current and has a total length of 181 kilometres. The future extension plans include the construction of the 8.5-kilometre rail link to Perth Airport.

Besides the B-Series trains, the Transperth network is served by 48 two-car A-Series vehicles manufactured jointly by ABB and Adtranz (now is a part of Bombardier Transportation). The Public Transport Authority of Western Australia also plans to acquire 41 new generation trains known as C-Series.