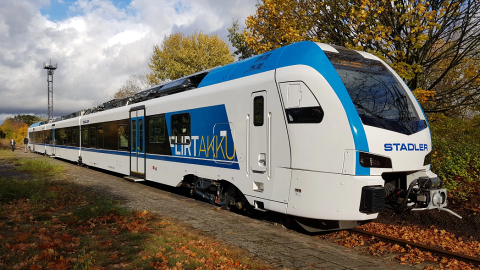 German public transport authority Nahverkehrsverbund Schleswig-Holstein (NAH.SH) has chosen Stadler Rail as a supplier for its first battery-powered trains. The Swiss manufacturer will deliver 55 battery-powered Akku multiple units to fulfil the first order of rolling stock of this type.

Stadler Rail has been chosen as a winner of the procurement proceeding organised by NAH.SH. The transport authority notes that there is a ten-day objection period before the agreement will be concluded. Nahverkehrsverbund Schleswig-Holstein plans to use the new trains on the regional non-electrified routes within the state of Schleswig-Holstein. The train manufacturer will also provide the maintenance of vehicles for a period of more than 30 years.

The Akku battery-powered vehicles belong to the Flirt train family, very popular in Europe. It was developed by Stadler Rail with the help of the German government that allocated two million Euros for this purpose. The innovative train was presented in September 2018 at InnoTrans 2018 trade fair. In October 2018 the Akku train made the first trip with journalists onboard having run a short distance between Berlin-Pankow to Schildow.

The Akku prototype consists of three cars with a total capacity for 310 passengers, 154 of them can travel on seats. The innovative vehicle is capable to speed up to 140 kilometres per hour. Stadler Rail considers that the Akku battery-powered train will gain popularity primarily in Germany, Austria, Great Britain, the Netherlands, Italy and, perhaps, in other countries with a significant share of non-electrified railways.

Germany is using another innovative train from Alstom since September 2018. It was the regional rail operator in Lower Saxony Eisenbahnen und Verkehrsbetriebe Elbe-Weser (EVB) that has entered into service the Coradia iLint hydrogen-powered vehicle developed by Alstom. The company intends to increase the hydrogen-powered fleet with 14 additional trains. They are scheduled to be delivered by 2021. Moreover, the hydrogen-powered trains will also serve the regional non-electrified routes in the Frankfurt Rhine-Main Metropolitan Area from the end of 2022. The local rail operator Fahrzeugmanagement Region Frankfurt RheinMain (fahma) has ordered 27 vehicles of this type.