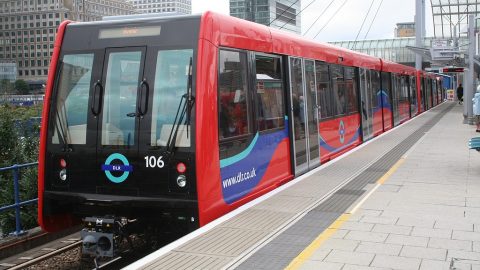 The new metro trainsets will allow Transport for London to replace the oldest fleet which is nearly 30 years and increase the train frequency on the DLR line. The vehicles will be entered into service from 2023. These trains will have the same length as the current DLR three-car units do. The CAF trainsets are featured by better conditions for passengers. They are equipped with the latest audio and visual real-time travel information, air conditioning, mobile device charging points, multi-use areas to accommodate pushchairs, bicycles and luggage as well as special spaces for wheelchairs.

“Replacing the oldest trains on the DLR and introducing a new modern fleet will ensure the railway continues to support the current and future growth in the Docklands area. With walk-through carriages, real-time travel information, air conditioning and mobile device charging points, the new trains will provide customers with a more comfortable and reliable service, replacing rolling stock that is nearly 30 years old and coming to the end of their operational life,” said Jon Fox, TfL’s Director of Rail and Sponsored Services, said:

DLR is a driverless metro network in the Docklands area of East London. It consists of seven lines with a total length of 38 kilometres. The network is served by 149 two- and three-car trains. All of them were produced by Bombardier Transportation. The oldest train series is the B90 (23 units) and B92 types (47 units). These trains are being operated since 1991 and 1993 correspondingly. In 2001 TfL has introduced the B2K type (24 units). The newest stock runs on the DLR line since 2008. The B07 trainsets have become the first three-car vehicles on the network.