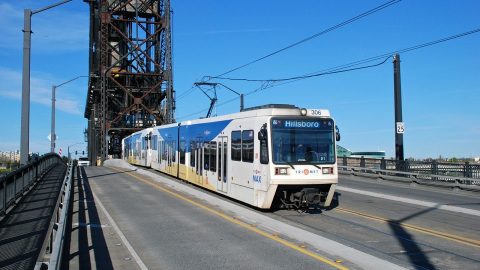 Siemens Mobility has concluded a new contract in the US. The German company will provide a mid-life overhaul service of 79 SD660 trams running in Greater Portland. The project will be completed in 2025.

Siemens Mobility will maintain the light rail vehicles of the SD660 series. In Portland, they are operated by TriMet transport agency and known as the Type-2 and Type-3 trams. These units were produced and supplied by the German company in 1997-2003. The maintenance project costs 80 million Euros. It also includes an option for up to 25 million Euros.”Midlife overhauls of LRVs such as this are an industry standard and vital as TriMet works diligently to provide world-class transit service that our customers can enjoy and rely on,” said TriMet General Manager Doug Kelsey.

The SD660 trams were produced at the Siemens Mobility’s North American Rail Manufacturing Facility in Sacramento, California, The maintenance will be also provided in the US – firstly,  at the Siemens Mobility West Coast Rail Services Hub in the Greater Sacramento, then at a newly opened Rail Services facility in Clackamas, Oregon. More than 15 employees will be hired to work over the project at the Clackamas site. The new service facility will be involved in the maintenance next year.

Siemens trams in US

The Siemens-made trams are one the most popular in the US. Thus, TriMet operates 119 vehicles designed by the German manufacturer. Since 2009, the public transport agency uses the S70 trams classified as the Type 3 and 4. The TriMet fleet includes 40 vehicles of these types. S70 units also serve tram networks in Atlanta, Houston, Norfolk, Salt Lake City, San Diego and other cities. The earlier generations of trams like SD100, SD160, SD200, SD400, SD460 run in Denver, San Diego, San Francisco and on other city networks.