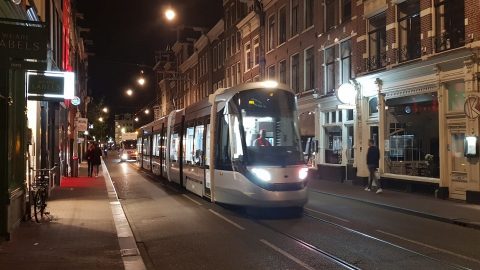 GVB, a public transport operator for Amsterdam, has started the nocturnal tests of the brand new Urbos tram. The trials will take six weeks.

The nocturnal tests began in the late evening of 28 May. Firstly, the entire tram network will be reviewed for accessibility and performance. “We need to know for sure that every piece of track has enough space everywhere and does not touch anything,” GVB manager of the 15G tram project Esther Tolner said. The initial rides were carried out at slow speed to check the turns and bridges.

On the night between 3 and 4 June, the tram made the first trip at a speed of 50-70 kilometres per hour. The tests are supported by the CAF team. “The CAF technicians who know this type of tram through and through are on board. They can deal with any technical malfunctions,” Esther Tolner explained.

The first Urbos tram was delivered to Amsterdam at the end of April. GVB classifies this type as 15G series. The public transport operator has ordered 63 five-section vehicles of this type. Six units are scheduled to be supplied this year. Next vehicle will arrive in Amsterdam at the end of June or at the beginning of July. GVB also has an option to order 60 additional trams.