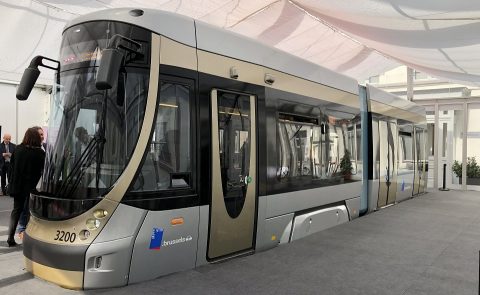 The Brussels public transport operator MIVB/STIB has ordered a batch of 30 new light-rail vehicles known as ‘Tram New Generation’ (TNG). It is the newest type to be introduced on the city tram network in 2020. The supply is valued at 67 million Euros.

The new deal is a part of the contract signed between MIVB/STIB and Bombardier Transportation in February 2018. The document provided the firm order for 60 TNG trams worth 167 million Euros and an option for 125 vehicles. 90 ordered trams will allow MIVB/STIB to replace the old stock and increase the capacity by 15 per cent. The public transport operator still has an opportunity to order the other 85 units. The trams from the initial order will be entered into service in the mid-2020, the vehicles from the second batch – from early 2023.

The TNG low-floor tram is based on the Flexity family being developed by Bombardier Transportation. It is the upgraded version of the types T3000 and T4000 running in Brussels. The vehicles will be supplied in two modifications. The short set has 32 metres long and a total capacity for 182 passengers, 47 of them can travel on seats. The long modification includes 43 metres long and a total capacity for 256 passengers with 56 seats. The initial order consists of 47 short and 11 long vehicles. The new batch includes only the short trams. Each vehicle has two multifunctional areas for carrying wheelchairs and prams. The full-scale model of the TNG tram was presented in Brussels on 30 April and on 2-5 May.

Hey there, I had 2 questions regarding these vehicles:

What is the maximum speed? How fast do they go in a more urban environment?
What is the crush load capacity?