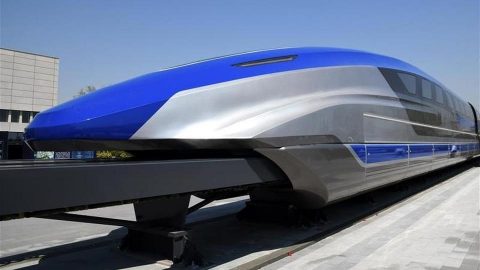 CRRC Qingdao Sifang, a part of CRRC Corporation, has unveiled a prototype of a new maglev high-speed train. The vehicle is able to speed up to 600 kilometres per hour. The manufacturer plans to start mass production of the train in 2021 after a series of trials.

CRRC Qingdao Sifang launched the project in July 2016 in cooperation with more than 30 companies and research organisations. The manufacturer is constructing an experimental centre to test the vehicle. It is scheduled to be opened in the second half of the year. The publicly unveiled prototype has only one car. But the real train will consist of five wagons.

The speed records of 501 and 487.3 kilometres per hour were set on the Chinese railway network in 2003 and 2010. The first figure was reached by a three-car maglev train on the Shanghai Maglev Train line. The average speed on this line is around 300 kilometres per hour. The second was set by a 16-car conventional wheeled train of type CRH380BL.

Currently, the world railway speed record is 603 kilometres per hour. The figure was reached by L0 Series maglev train prototype on the Yamanashi Test Track in Japan in 2015. The maximum speed set by conventional wheeled trains is 574.8 kilometres per hour. This record was done on the LGV Est line between Paris and Strasbourg.