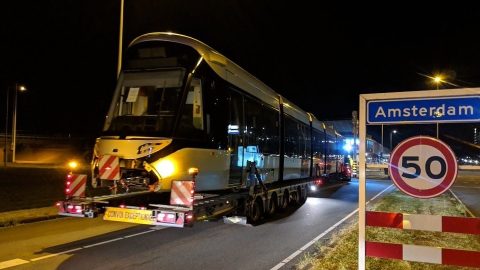 Spanish rolling stock manufacturer CAF has supplied the first Urbos 100 tram to Amsterdam. The vehicle will be stalled at the workshop in Diemen. Hereafter the Amsterdam public transport operator GVB will test the tram on the city routes.

The first Urbos 100 tram was delivered from the CAF’s factory in Zaragoza, Spain where it was produced. The vehicle was placed on the trailer and travelled more than 2,300 kilometres via France and Germany. The tram arrived in Amsterdam on the night between 25 and 26 April after an almost 10-day journey.

The Urbos 100 trams will become the newest rolling stock in Amsterdam and will be branded as 15G series. According to the 2016 order, CAF will supply 63 five-section bidirectional trams by 2022. The deal also provides an option for 60 vehicles. Each tram has a length of 30 metres and a width of 2.4 metres. Its total capacity is designed for transportation of 175 passengers, including 50 seated.