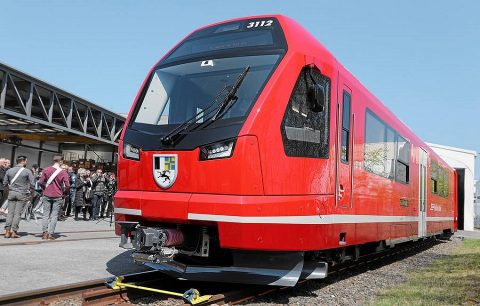 Swiss rolling stock manufacturer Stadler Rail has rolled out the brand new “Capricorn” train. The four-car electric vehicle will be entered into service in late autumn this year by the Rhaetian Railway (RhB). The train will serve the Landquart–Davos–Filisur route in southeastern Switzerland.

The roll-out ceremony took place on 15 April at the Stadler’s facility in Altenrhein, canton of St. Gallen, in the presence of 120 guests from business and politics. The “Capricorn” train was demonstrated publicly for the first time. “The new trains represent a significant leap forward in terms of rail traffic productivity in Graubünden. We are delighted to be able to successfully implement this project with our long-standing partner, Stadler, by our side”, said Renato Fasciati, Director of RhB.

In June 2016 the Rhaetian Railway (RhB) has placed the largest order in its history – for 36 electric trains. Stadler has concluded the deal with the train operator. The agreement is valued at 361 million Swiss Francs (more than 317 million Euros). “The new “Capricorn” is a historic milestone in two respects. Firstly, we can offer our passengers more comfort. The successive commissioning of the new trains will give us modern rolling stock accessible to handicapped passengers on our entire main network. Secondly, with an order value of 361 million Swiss francs, this is the largest procurement project in our history,” noted Renato Fasciati.

RhB is regarding the “Capricorn” units as a significant leap forward in terms of productivity. Since 2021 the company will use them in multiple-unit train control on the Landquart–Klosters–Davos/St. Moritz route. The trains will also be used in the Surselva and Unterschnitt areas. It means that the different parts of the train can be divided into sections in transit and continue their journey to different destinations. The vehicles are coupled on the returning way and travel as a joint trainset. It will allow RhB to reduce costs and provide more connections, especially in the single-track lines.

The four-car “Capricorn” vehicle is capable to carry 164 passengers on seats including 35 in first class. The trains can speed up to 120 kilometres per hour. Three of four cars have a low-floor entrance. Each trainset is equipped with a toilet for the passengers with reduced mobility, wheelchair spaces and tactile signage for the visually impaired. The vehicles also offer spacious areas for bicycles, skis and other sports equipment, as well as pushchairs and luggage. The “Capricorn” trains provide a high-level comfort to passengers with power sockets in all compartments, the modern Passenger Information System and video surveillance. The windows in all compartments can be opened in all compartments.