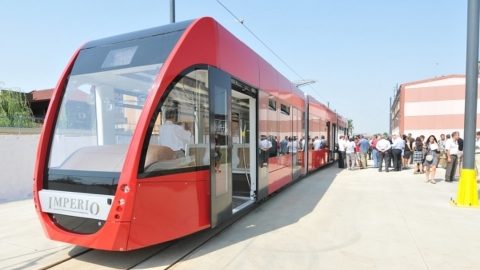 The highest number of trams, 24 units, was ordered by authorities of Cluj-Napoca, the second largest city in Romania. The city of Galaţi purchased 18 trams, Oradea and Arad – 10 vehicles per each. Astra Vagoane Călători based in Arad, western Romania, assure customers that it provides all the deliveries.

“The last two years were very sad for our factory because it worked at only 30 per cent of its capacity, but we are currently working at 60 per cent. We will further increase and we will have to hire at least 100 people to fulfil our obligations,” said Valer Blidar, the owner of Astra Vagoane Călători.

Astra Vagoane Călători is mostly specialised in manufacturing the various types of passenger cars. In 2011, the company presented its first tram type named as Imperio. It was developed in cooperation with German producer Siemens Mobility. Half of the details were supplied by the German partner, half of them were made in Romania. The design was provided by Astra Vagoane Călători. However, the Imperio type is based on the Avenio tram family developed by Siemens Mobility.

In 2016, the company assembles the other tram type – ‘Autentic’. This tram has been declared as a totally Romanian vehicle. But some details were also imported. The Imperio vehicles run in Arad and the Autentic units in Timișoara.