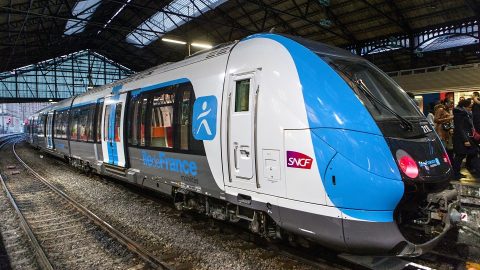 French national railway operator SNCF has awarded Bombardier Transportation with a new contract for the delivery of 47 Class Z 50000 electric trains, commonly known as Francilien. The deal worth 330 million Euros was financed by the Greater Paris public transport authority Île-de-France Mobilités. It will allow SNCF to increase the number of Francilien trains on the commuter service in Greater Paris from 240 today’s units to 360 sets in 2022.

The order is a part of an agreement signed between SNCF and Bombardier Transportation in 2006 for supplying 372 Francilien units. This batch includes the delivery of 42 seven-car train sets and five eight-car trains that will serve three lines of the Transilien commuter service. In 2022, the Class Z 50000 units will run on five Transilien lines and become the largest rolling stock series in Greater Paris.

Bombardier Transportation manufactured the first Francilien trainset in February 2009. This type of rolling stock started commercial operations in December 2009. These units are assembled at the Bombardier’s facility in Crespin, northern France. Due to this reason, the producer considers the Francilien units as truly French-made sets.

“This “Made in France” train illustrates the work excellence of engineers who designed the train in 2006, of operators who produce it since 2009, and of our expert technicians who ensure the train operation every day alongside SNCF”, president of Bombardier Transportation France Laurent Bouyer said. Besides the Francilien sets, the Crespin manufacturing site produces Omneo double-decker trains and the units for RER, another commuter service in Greater Paris.