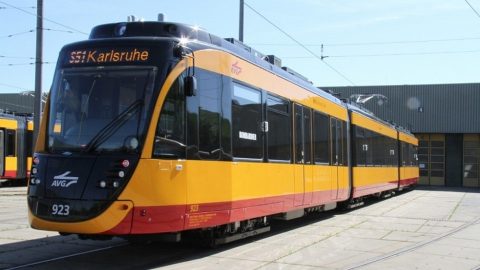 German public transport operator Albtal-Verkehrs-Gesellschaft has ordered twenty additional light rail vehicles for the Karlsruhe tram-train service. The two-car trams will be supplied by Bombardier Transportation between May 2020 and March 2021. The order costs 87 million Euros.

The new order will increase the number of Flexity trams requested by Albtal-Verkehrs-Gesellschaft (AVG) to 62 units. In 2009, the public transport operator signed an agreement with Bombardier Transportation for the delivery of thirty dual-system trams with an option for 45 units. The order was fulfilled in 2011-2013, when the initial set of vehicles was supplied. Later, in 2016, AVG used its option and ordered twelve more units.

“Striving to provide attractive local transport services, we have decided to order twenty additional dual-system vehicles from Bombardier Transportation. This will allow us to purposefully enlarge our vehicle fleet offering high-quality standards to our passengers”, CEO of AVG Alexander Pischon said. After accomplishing the third order, AVG remains an option for thirteen additional trams. It is unknown when the public transport operator will use this supplement.

The Flexity trams were designed as dual-system vehicles that are capable of running on the tram network as well as the railway network. Karlsruhe was the pioneer city adopting the tram-train service in September 1992. The new service allowed to connect the city with its suburbs without additional changes from a train to a tram. Now, such mode of transport is in use in twelve European cities, half of them located in Germany.

The 37-metre dual-system trams produced by Bombardier Transportation have a seating capacity for 93 passengers and a total capacity for 244 passengers. The vehicles can speed up to 100 kilometres per hour. The trams are convenient for people with reduced mobility, for passengers with pushchairs or heavy luggage and for cyclists. All the units are equipped with a modern passenger information system, Wi-Fi, and even a passenger toilet.