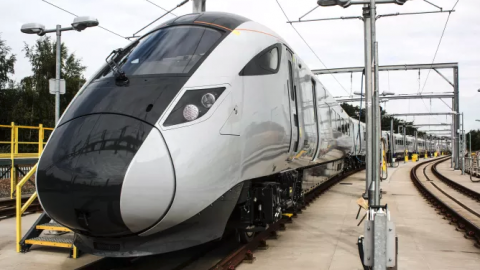 Tests for TransPennine Express’ Nova 1 fleet, which is being built by Hitachi Rail Europe, have begun this week. It is being tested on Britain’s East Coast Main Line that runs between Doncaster and Darlington. In total, Hitachi Rail Europe will deliver 19 five carriage Nova 1 trains. They are due to enter service in 2019.

Hitachi is using Japanese-bullet train technology to make the new Nova 1 fleet light and aerodynamic. The 19 trains will all be bi-modes: they can switch mid-journey between electric and diesel power. The trains will be able to run in either five or ten carriage formation, capable of speeds of up to 140 miles per hour in electric mode and 125 miles per hour using diesel engines.

The fleet is being built by Hitachi and financed by Angel Trains. In the coming months, testing will span the entire route, calling at major stations across The North and Scotland. The train is currently using Hitachi’s new depot in Doncaster.

By using modern MTU engines from Rolls-Royce, the trains will cut emissions under diesel power by up to 90 per cent, according to Hitachi. The trains are fitted with European Rail Traffic Management System (ERTMS), in preparation for the introduction of ERTMS on the route.

Each new train will offer free Wi-Fi in both Standard and First Class as well as onboard entertainment system Exstream, allowing customers to stream the latest movies and TV shows during their journey.

From 2019 this fleet will run between major cities in the North of England and Scotland, from Manchester and Liverpool, across the Pennines to Newcastle and Edinburgh, among others. The trains will replace three-car Siemens class 185 DMUs, which currently operate on this line, and provide 161 additional seats compared to the DMUs.