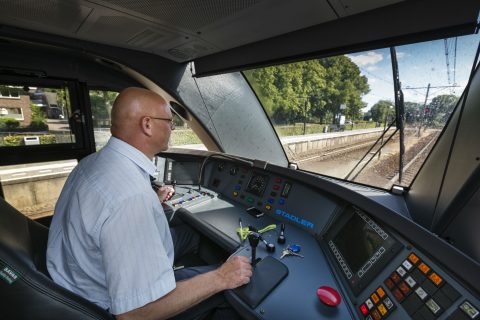 The European Commission (EC) has proposed pilot projects to test alternative language requirements during railway operations. In case of a diversion train drivers may not have the language level needed for the countries on the alternative route, resulting in the cancellation of the train. This happened during the disruption of the line between Rastatt and Karlsruhe last year.

The EC has drafted the amendment of Annex VI of the Train Driver Directive, inviting the public to provide feedback in the next four weeks. Lobby organisation ERFA urges a simple and pragmatic approach, ultimately eradicating the need for B1 language training for drivers.

At the moment European legislation states that locomotive drivers must possess a B1 level of language competency in every country they drive a train. This means that train drivers are only able to drive on certain routes. In case of a diversion, for example when lines are closed for planned engineering works or during an unforeseen event, eligible train drivers may not be present, resulting in the cancellation of the train. This proved to be the case when the line between Rastatt and Karlsruhe was disrupted in the summer of 2017; wheras diversion routes where available, eligible drivers were scarce and many train operations cancelled.

“It is necessary to explore alternative options to the current language requirements allowing for greater flexibility but ensuring an equivalent level of safety with the current requirements. Those options could consist in more targeted language requirements (i.e. with focus on rail specific terminology), or to a lower general language level combined with alternative means to support effective communication. They should ensure an active and effective communication in routine, degraded and emergency situations”, the EC writes in its proposal.

To this end, the EC proposes that railway undertakings in cooperation with infrastructure managers may carry out pilot projects to test alternative means of ensuring effective communication during railway operations. “It is necessary to test the alternative means in day-to-day operations. Therefore, the impact of those alternative options should be examined under real conditions in the framework of pilot projects”, the EC stated.

ERFA suggests to carry out a pilot following the Swiss model. “The language requirement is A1+, the system works and the safety concerns are managed cleverly. What is good for Switzerland could be good for other countries. Roll out lessons learned from trials at borders and then extend on to corridors”, it stated.

Moreover, it suggests developing a glossary of key commands that can be used by both signallers and drivers, for example, if there is a need for urgent evasive action. In the longer term ERFA urges an eradication of the B1 language requirements and a change to English as a common language across all rail networks. “We recognise that this is a long-term aim, but development work for this project should begin now so that all parts of the railway can consider recruiting staff with English language skills. They will be the train drivers and signallers in ten years time.”

According to the draft amendment, the pilots may be carried out in two phases. In the first phase, train drivers may be tested acquiring alternative skills, but still fulfilling the existing requirements. If the alternative skills prove to effectively complement the language skills of the driver, then the second phase be carried out where train drivers are employed without the current language requirements.

A railway undertaking and infrastructure manager wishing to carry out pilots must jointly submit their proposal to the EC, which in turn will consult the European Union Agency for Railways (ERA) and national safety authorities. Feedback on the draft amendment can be provided until 20 July 2018.