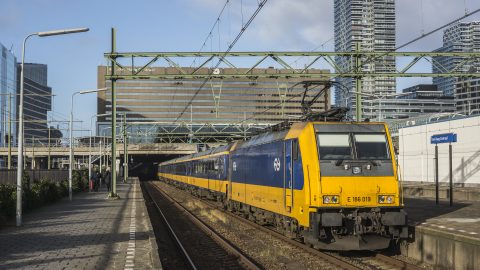 Railway operator Dutch Railways (NS) and French leasing company Akiem signed a sale and leaseback contract for 45 Bombardier Traxx locomotives. The locomotives are designed for operations in the Netherlands, Belgium, Germany and Austria. In the Netherlands, they pull NS passengers train on the high-speed line.

NS has the Traxx locomotives at their disposal for as long as necessary. This is included in the agreement. According to an NS spokesman, this assures the continuity of the service on the domestic high-speed line. The lease contract is due to start in June 2018.

For the period of the lease contract, NS remains responsible for the maintenance and operational management of the locomotives. Through this contract, NS has the certainty that the locomotives will have a fixed residual value. They are set to be replaced by new equipment after 2021: NS has ordered 79 new locomotives from French manufacturer Alstom.

Akiem Group CEO Fabien Rochefort said: “This major investment with NS strengthens Akiem’s position in the Benelux network and increases the company’s coverage of the main European corridors, with a fleet of 440 locomotives by the end of 2018.”