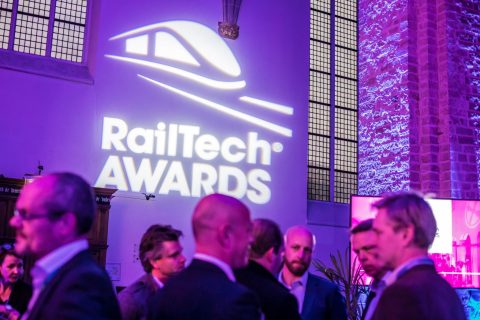 These are the nominees of the RailTech Innovation Awards 2022

At RailTech Europe 2022, Innovation Awards will be awarded to five railway innovations. Who are this year’s nominees and what are their innovations?

On 21, 22 and 23 June, the international rail sector will gather in the Jaarbeurs Utrecht for the next edition of exhibition and conference RailTech Europe. To celebrate and encourage innovations in rail, the RailTech Innovation Awards are an integral part of the event.

The Innovation Awards are divided in three categories: Digitalisation, Infrastructure and Technology & Design. There is an additional award specifically for start-up companies, as well as an Audience Choice award. The voting for this award is open on the RailTech Europe website.

PJ Monitoring has developed an automated brake testing system which completely replaces the established manual inspection process for rail freight wagons, which is quite time-consuming. Brakes must be checked following a 24-hour standstill and each time a change is made to the wagon configuration. The system for automatic checking of the wagons’ brakes and semi-automated train preparation is in use on more than 200 SBB Cargo freight wagons and 18 DB Cargo wagons.

In a project of Dutch infrastructure manager ProRail and CGI, the goal is to improve operations when disruptions on the tracks occur, like incidents, damage or blockages. The VGB Solver calculates all possible alternatives for impacted trains, and calculates optimal alternative timetables with possible disruptions as its input. VGB stands for ‘Vooraf-gedefinieerde bijsturing’ or ‘Pre-defined adjustment’ in English.

it automates this process where currently, a team of professionals of ProRail is constantly trying to anticipate these disruptions by preparing alternative schedules in advance. The technology is still in the development phase, and is expected to go live by the end of 2022 on the tracks in the Netherlands, one of the busiest in the world.

Getzner developed the so-called “sensor sleeper”, which makes it possible to measure surface contact pressures directly between the sleeper and the ballast without interfering with the characteristics of the track. It is a special pressure sensor, which is installed on the bottom of the sleeper. The technology uses direct measurement to look into the sensitive interface between the underside of the sleeper and the top layer of ballast and transmit all the relevant data in real time.

Munich-based startup Servail developed a robotic platform for maintenance of railway tracks and rolling stock. The compact robots move in track without protruding into the loading gauge of railway vehicles, and this way do not inhibit train operations. It enables infrastructure companies to perform maintenance processes without closing tracks, and also for railway companies to perform underfloor train inspections without moving the vehicles into maintenance workshops.

After offering their Pantograph inspection monitoring for some time, PantoInspect has now launched a hybrid scanner. Using a “best of both worlds” approach, the scanner will determine critical pantograph properties, such as the absence of a horn, using a system where multiple sensors feed data into multiple algorithms. Some of these algorithms are “old school” and perform accurately under normal conditions, others rely on artificial intelligence, and perform better in extreme situations, such as extreme weather conditions. The different results are each provided with a degree of confidence and are finally fed into a voting algorithm. Like a jury, this voting algorithm judges the work done and chooses the best answer.

This innovation is a retrofit solution that allows companies to run diesel engines on renewable fuels, such as bio methanol. It could be applied to track work machinery, diesel locomotives working on last mile and for long distance diesel locomotives. There are currently about 12,000 diesel trains in Europe, where diesel trains still account for 20 percent of all rail transport.

Eliminating embedded balises between the train tracks reducing infrastructure costs, installation, inspection, maintenance costs and simplifying supply chain management. It enables increasing capacity on and throughput on demand through Virtual Coupling and vehicle platooning applications. Also, Climatic resilience is optimised as wayside beacons are mounted at least 1.5 meters off the ground. The HRNS was physically deployed by the Hitachi team on a 1.5 kilometres of test track in Naples and on a test vehicle over the course of 10 days.

Compared to existing sleeping cars the innovative sleeping car design of ITS improves privacy during travel and almost doubles the capacity of beds per meter. a bilevel sleeping car offering 80 beds to travellers on 41 meters (length over headstocks), which also can be used in day configuration with two seats. More than 40 metre length is possible as the wagon consists of two half-wagons connected by a Jakob boogie. The sleeping car concept was deemed technical feasible by multiple train manufacturers, and with its high passenger density, it reduces infrastructure charges per bed for railway operators.

“Green” sleepers made of concrete based on sulfur by ThioTrack

Railway sleepers based on a revolutionary form of concrete that not only exceeds the technical performance of cement concrete but is also 100 percent circular are developed by ThioTrack. Compared with conventional concrete made using cement as a binder, in sulphur concrete, the cement and water are replaced by sulphur. It makes minimal impact on the environment and there is no loss of quality.

A holistic approach was developed which allows simultaneous treatment of ballast, weed control and soil and groundwater decontamination on the same time during simple spraying of the railway road. Railway ballast oxidation technology (RBO), is an in-situ Physico-chemical technology that can simultaneously decompose organic and herbicide leftovers on the ballast surface, subsoil and groundwater. VC is a new type of herbicide that provides non- Glyphosate and Glyphosate-resistant vegetation control on railway tracks.

Metrotenerife’s maintenance and civil engineering teams developed a solution to o improve the process of track replacement. The removable insulating chamber for grooved rail solves the inconveniences of the demolition of the track covering, which was necessary beforehand since both the rails and their fasteners are embedded in it.
The innovative insulating chamber can be removed without affecting covering. The replacement process start with a vertical extraction of the rubber chamber (or chamber side parts) allowing for complete removal of rail and fasteners leaving street adjacent structures intact.

Viezo developed vibration energy harvesting technology based on a unique piezoelectric PVDF polymer material, which converts vibrations into electricity to power sensors and is embedded in the hardware of their Powerail solution to make the sensor maintenance-free and with a longer service life. Its fully autonomous monitoring solution for passenger and cargo fleets enables a simple, effortless, and convenient user experience of condition-based maintenance.

The submissions were judged by a professional jury that consists of experts in the industry, who will also decide on the final winners. The jury members are:

The RailTech Europe exhibition is free for everyone interested. Get your ticket now and join the European railway sector!