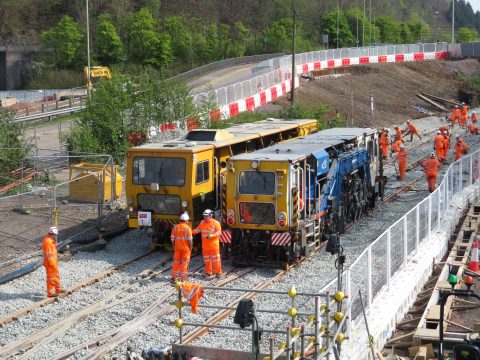 Enough delay, where is the UK Rail Network Enhancement Programme?

Tired of waiting, the Railway Industry Association (RIA) has published its own Rail Network Enhancements Pipeline (RNEP) update. The document, which the UK government claimed it would publish every year, is somewhat behind schedule. In fact the RIA says it’s three years overdue, and the body that represents the supply chain in the UK has taken matters into its own hands.

On the three-year anniversary of the last edition of the Rail Network Enhancements Programme, the RIA has laid down an ultimatum to Downing Street. What the organisation wants to take away is a firm commitment from the government to put the rail industry back on track for the future.

Frustrating for the association

Created in 2019, the RNEP was billed by the UK government as a “new approach for rail proposals”. However, that new approach has proved to be a silence like never before. It’s one that certainly pre-dates the recent turmoil in Downing Street – so strike that off as a possible excuse. The equally fast revolving door at Horseferry Road, where the Department for Transport has seen railway ministers come and go, is just as frustrating for the association. As of the beginning of this week, the sign in the window reads “railway minister wanted, no experience necessary, apply within”.

It’s all proved no joke for the members of the RIA. They say that the non-publication of the RNEP is proving detrimental to the industry, and to the economy at large. “The RNEP would provide certainty and transparency through the annual publication of a pipeline of enhancement projects in England and Wales,” says the association.

Reduction in the enhancement budget

Now, armed with their own version of the long-overdue document, the RIA has called out the government’s procrastination. It has also highlighted a what it says is a reduction in the Control Period Six (CP6) rail enhancement budget – effectively, the government’s rolling five-year plan for the railways as implemented by the government’s own infrastructure agency Network Rail.

“The lack of any subsequent update has led to considerable rail supply sector uncertainty and concern”, says the RIA. “Based on publicly available information, the RIA has published its own RNEP, to give some understanding of enhancement projects to its members. The trade association has analysed all 58 projects included in the original RNEP and given each one a red, amber or green rating.

The ratings devised by the RIA divide schemes into green for complete, under construction or where there is public information confirming that the project will be delivered. Projects in this category include large scale regeneration of the TransPennine Route, and more modest projects like the reintroduction of mixed traffic on North Northumberland line. Then there are Amber projects, where public information suggests the project development is progressing, but there is not yet certainty it will be delivered. In ministry-speak, this usually means that the project is progressing towards an Outline Business Case (being talked about)or a Strategic Outline Business Case (being talked about really earnestly). Count critical reliefs like Manchester’s Castlefield Corridor and London’s Clapham Junction among those.

There are currently 18 green projects in the RIA version of the document, and 21 amber-rated projects. Of most concern to the association are the 19 red-rated projects, where there is no information about the status of the project, or there is a large amount of uncertainty over whether it is progressing. If you’re concerned for the Syston to Trent gauge enhancement scheme, or confirmation of the Ely Area Capacity Enhancement programme, it’s probably best to ‘look away now’.

The RIA has also identified eight projects which were not included in the 2019 RNEP but have subsequently been announced. These include major schemes such as Midland Main Line Electrification and the Integrated Rail Plan for the North and Midlands. The projects also include the Restoring Your Railway Fund which is made up of many smaller schemes.

“Whilst we are all aware there are difficult economic times ahead, as well as increased pressure on public spending, RIA and our members are simply asking for visibility on what the Government is planning on rail enhancements projects, said Darren Caplan, the RIA’s Chief Executive. “We are not lobbying on budgets. Real jobs, investment and even tax revenues from the rail supply sector rely on understanding the Government’s intentions. This uncertainty is holding back the supply sector’s potential to deliver both economic growth around the UK and also improvements for passengers and freight customers, key objectives for the Government.”

1.
Stuck in old standards at infrastructure, Industry seriously has failed.
Quality first, then quantity!…
(All other modes, except railways…, upgrade, for added load – and lower costs…, etc.)
2.
Government, primarily, need a Goal, singular, for UK infrastructure!
3.
Failure of Commission was trigging Brexit. Nearness to market, Goal of EU…, seems forgotten, by Commission. (Shortcomings of railways, now is excuse for extras on majority…)
4.
Goal of UK infrastructure shall be Nearness!