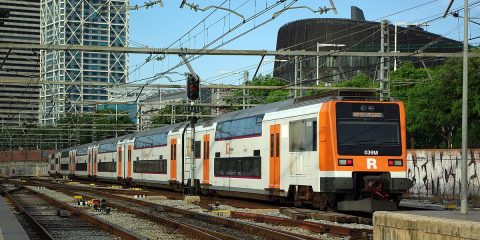 When Germany introduced its 9-euro ticket, train stations were packed and trains overflowing with passengers. Spain will offer free tickets, and local transport associations fear the worst. Can the trains actually handle the additional passengers? And what will be the consequences for public transport?

“The Renfe trains in Catalonia are already crowded. There will be a problem in September“, says Jordi Porta of Public Transport Association for Catalonia PTP. Starting next month, Spain will introduce a four-month free ticket for Renfe commuter and medium-distance trains. It is one of the measures the Spanish government is taking in face of rising inflation and rising prices, similar to Germany’s 9-euro ticket.

According to Porta, the potential drawbacks of the government measure for public transport are not acknowledged. One of the issues is that buses run parallel to certain train lines to the same cities, he explains. “Some of these services can even be faster than the train, and thus many people take the bus. When the Renfe train on the same route will be free, however, people will opt for the train, which is already crowded.”

Renfe spokesperson Andrea López Del Puerto responded to RailTech saying that Renfe is “positive about the free tickets, because it encourages the use of public transport.” Bus operators, however, are not happy with government initiative and went to court over what they see as unfair competition, as they fear losing their passengers, noted Porta.

With a free ticket for certain trains, additional passengers can be expected, as was the case in Germany following the introduction of the 9-euro ticket. “Currently at Renfe, we have are at 80 percent pre-Covid occupancy so we can take on travellers”, said López.

However, according to a Renfe employee involved in train schedules, the train fleet can normally shoulder only the current service with little increase of demand. For increases larger than the 20 percent there is room for, albeit in theory, more trains and drivers must be considered. “Also, the material and human resources have to be accompanied by signalling, track, depot and maintenance improvements and growth. All these needs can take years of planning and works.”

Deutsche Bahn reported a 10 to 15 percent increase in people taking regional trains this June. Berlin and Brandenburg recorded an even greater boost, with up to 25 percent more passengers on certain routes, a spokesperson of the Berlin-Brandenburg transport authority VBB told DW. On the public holidays, some regional trains bound for the popular Baltic and North Sea coast were so crowded that passengers had to be turned away, reported DW.

The Renfe employee believes the measure will bring more passengers, but only for the period when the free tickets are valid: the four months from September onwards. “We need regular investments improving the network instead, for increasing the capacity and reliability.”

The PTP calculates that the measure will cost Renfe around 64 million euros in Catalonia alone. Nationwide, the bill could come out at some 140 million. Instead of compensating this, the government should rather be spend on improving public transport, says the PTP.

Public transport in the Barcelona area is based an integrated system, with flat rates for 10 trips, the most popular being the monthly ticket. “In Zone 1 for example, public transport is already relatively cheap: 40 euros for three months of travel for students, and already crowded. This situation calls for more vehicles and more drivers, not for free train tickets”, says Porta.

This is of course not the same across the country, especially outside metropolitan areas. In the zones outside of Barcelona’s integrated system, the prices are higher, especially to towns without a train connection. According to Porta, a bus ride can cost up to 20 euros per trip to some towns. Only making some train tickets free is a discriminatory measure to areas which do not have a train connection. Overall, the conditions for public transport should be improved, as well as a fair tariff model that is competitive to private cars use, for all zones whether close to a large city or not.

It is important to note that the measure for free tickets was taken first and foremost in face of inflation and to cushion rising fuel and living costs, and not necessarily to promote public transport. The Spanish government did also announce a policy in June for a 30-percent discount on public transport, including metros, buses and trams, but this only applies to subscriptions and multi-trip collective public transport tickets. This however excludes certain less populated regions, who are not part of an integrated public transport zones, notes the PTP.