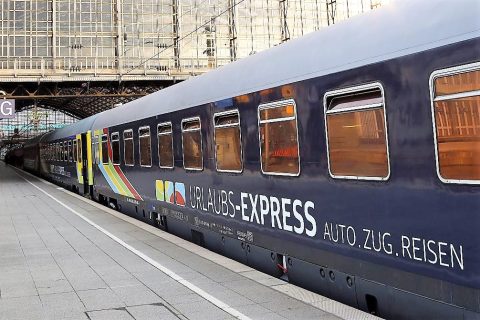 Is rail capable of winning back summer holidaymakers?

Trains have long been associated with tourism and discovering a new country or travelling Europe. However, in the past decades mass tourism seems to have deserted one of the oldest modes of transport still in existence in favour of aviation and the car. What is the situation of the train in this market today?

“The train, it ‘s already a taste of holiday”. This was the slogan of the sleeper train to sunny destinations or to the mountains in winter, whether in national traffic in the major countries such as France and Germany, or internationally. In the early 1960s, when motorways did not yet lead to all the beaches of the Mediterranean, the train could still be the main travel mode.

But the place of the train as the dominant form of transport began to be questioned from the mid-1960s onwards, even on long-distance travel.

Tourism designed for the road

In 1969 in France, the Paris-Avignon route could be made entirely by motorway, opening up many facilities to the Provence and the Mediterranean. The full motorway route to Nice and Narbonne was finished in 1975. In the early 1980s, the motorway crossed the Pyrenees and connected the Spanish beaches. For the whole of Northern Europe, access to the south was suddenly a lot easier.

In the 1970s, Munich was also connected by motorway to Verona, which meant that millions of German and Benelux tourists had very good access to Italy and Tuscany.

As tourism became a large-scale industry, travel agencies focused on easy-to-book holidays to Sicily, Greece, Turkey, Portugal and the Canary Islands (Spain), further diverting the northern European public to planes, where the sun is only two or three hours of flying away, for an all-inclusive competitive price.

Today, booking travel trips via internet emphasises the combination of using a private car and flat rental (or camping place) in the three major destinations preferred by northern Europeans: France, Spain and Italy. All of air, road and digital developments gradually undermined the place of the train in the mass tourism market.

Of course, there are still trains that take tourists to sunny destinations or to the Alps. These are trains that only run in certain periods, for example from the Benelux countries (Belgium, the Netherlands and Luxembourg) to the winter sports resorts in Austria. But this is a niche market that no longer interests the big tour operators.

In Germany, some operators are trying to revive mass tourism via rail. Urlaub Express, for example, operates night trains from Hamburg or Düsseldorf to Verona in Italy. BTE is also operating a similar train between Hamburg and Lörrach, near Basel. These trains allow you to take your own private car with you and have sleeping cars and couchettes. This is ideal for families and saves people from driving through the night or making stop, saving time while people are sleeping.

But these are mainly examples from Germany, whereas there are no more examples of trains from the Benelux countries to the South of Europe. Most tourists also take the high-speed ICE in Germany or the TGV in France. The SNCF operates additional TGVs only in July and August. Thalys runs a direct train from Amsterdam to Marseille, but only on Saturdays.

It would appear that the large incumbent rail operators are focusing more on individual customers, which is a market more easier to manage. Most of these rail operators do not have sufficient skills like tour operators to develop package tourism products.

On a long-distance train, you meet people who travel for many different reasons. Some are travelling for business, some are going to meet their families and some are visiting cities rather than beaches. Faced with this diversity, the railway companies only deal with the ticketing of transport, without worrying about accommodation, which remains an issue that travellers solve themselves.

Some agencies are desperately trying to change holidaymakers’ attitudes by creating lists of destinations easily accessible by train. But this will again be a niche market that mostly appeals to people who are already looking to make more sustainable choices, and will not address the climate issue on a large scale. We have seen it recently: airports have been faced with an unexpected boom of holidaymakers determined to go on their vacation as they have always done.

Perhaps the train will have to reinvent itself – as the maritime sector has done with cruises – in order to win back a clientele that today often prefers the car or the plane to get to their holiday destination.

3 comments op “Is rail capable of winning back summer holidaymakers?”

Good article, although I miss some recent developments involving Sunweb, that wants to work together with European Sleeper to offer night trains from the Netherlands and Belgium to the Alps, as well as TUI that works together with GreenCityTrips.
While these trains (will) only transport a fraction of the passengers via road or rail, they are interesting new concepts which could be light at the end of the tunnel and have potential to grow in importance.

Recently went to Penzance from North Yorkshire, train to London, sleeper to Penzance and return on daytime trains. Wonderful, and excellent public transport in and around Penzance. Didn’t need a car. The only way!

Recently went to Penzance from North Yorkshire. Train to London, sleeper to Penzance and returned on daytime trains. Great bus and train services in the area and cheap. Didn’t need a car. It’s the only way!