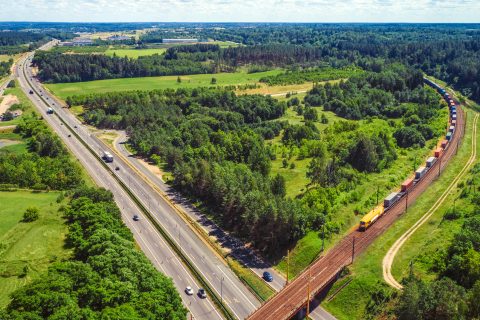 In the first round of the Connecting Europe Facility (CEF) for the Trans-European Transport Networks (TEN-T), 77,7 percent will go to railway projects, an analysis by RailTech.com shows. Sixty-seven rail projects across Europe will be funded for a total of 4,2 billion euros, out of the 5,4 billion for all 135 selected projects.

All of the projects funded through this programme of the Connecting Europe Facility go to the TEN-T network, a Europe-wide network of railway lines, roads, inland waterways, maritime shipping routes, ports, airports and railroad terminals. The ultimate objective is to close gaps, remove bottlenecks and technical barriers, and EU member states can propose projects to apply for funding. At the end of June, 135 projects were approved in the first call.

The biggest beneficiary of the rail projects from the Connecting Europe Facility’s first call is the Polish infrastructure manager PKL Polskie linie. A hefty 755 million euros will be directed towards modernising primary passenger lines E65 within the Silesian Province between Będzin and Katowice Piotrowice.

In addition, 540 million euros will be channeled to the construction of the Fehmarnbelt tunnel, which will connect Germany and Denmark via rail and road. Only the rail part of the tunnel will receive CEF funding. More specifically, the activities include the production and immersion of tunnel elements, the construction of the tunnel portal and the tunnel ramps on Lolland and Fehmarn, the establishment of the Tunnel Power Supply, continued monitoring environmental monitoring and safety at sea measures as well as public awareness measures.

Another 357 million is earmarked for Rail Baltica. The funding will support studies and works necessary to continue the implementation of the project across the three Baltic States. Rail Baltica is a railway line with standard European gauge (1435 mm) that will connect Estonia, Latvia and Lithuania with each other and with the European railway network.

In the graph below, the division of CEF Transport funding for TEN-T divided by transport mode can be found.

CEF Transport TEN-T first call 2022
Infogram
A CEF Transport budget of 25,8 billion euros was set for the period between 2021 and 2027, which will be spent in several rounds. In this first call, which closed on 19 January 2022, 399 applications were submitted. Following evaluation, 135 proposals were selected and retained for CEF funding, amounting to 5,4 billion. Next to the projects for the TEN-T network, the CEF transport consists of a separate calls for Military Mobility and for Alternative Fuels Infrastructure Facility, which are currently open, and further calls to be launched in September 2022.
Of CEF Transport, the majority goes to rail projects (also in previous funding periods), but it is not the only EU funding instrument.  Of the Cohesion fund, European Regional Development Fund (ERDF) and the Connecting Europe Facility (CEF) combined, more money went to road projects than to rail in the period 2007-2020, it was found by Investigate Europe.

Railway, yes, but robust and resilient, thus a sustainable device for high quality transports . (It is 2022 now and ware owners, clients, have shifted strategy to On Demand.)
Existing lines shall be upgraded. Technicalities, not designed for to days traffic, thus calling for costly “maintenance”, now decisively has to be outed.
(Devices, by air and by sea, etc., upgrade for reduced costs.) For not devastatingly cementing, any railway investment, safely shall be with “height” for future demands.