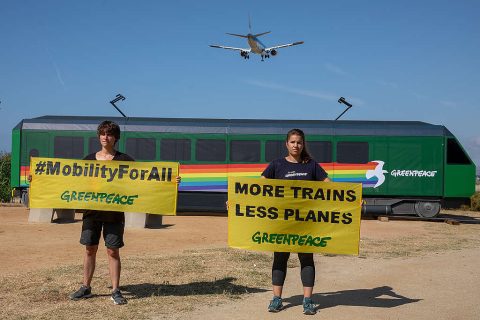 Greenpeace calculated that banning the EU’s busiest short-haul flights and shifting to rail wherever a train connection under six hours already exists would save 3.5 million tons of CO2 equivalents per year. According to a survey conducted by the European Investment Bank (EIB) in 2019-2020, 62 per cent of Europeans would support a ban on short haul flights.

If countries add new daytime and night train connections and services, better wagons and tracks, improve accessibility for all and make tickets cheaper, Europe could replace almost all of the top 250 short-haul flights and save some 23.4 million tons of CO2e per year, says Greenpeace. That is about as much as the annual CO2 emissions of Croatia.

An example of a flight that would be banned if it was up to Greenpeace, would be Madrid-Barcelona, one of the busiest flights in Europe and the busiest in Spain. Flying this route emits up to nine times more CO2 equivalents than taking a train. The 2.5 hour train ride is considered faster than the overall plane journey, of 1 hour and 20 minutes flight time with extra boarding time and a ride from the airport to the city. The high-speed trains on this line are on the rise and now exceed pre-pandemic passenger numbers, but it is still a busy flight route as well.

The price probably plays a significant role in that. A quick online search shows there are tickets with similar cheap prices as flight tickets available by Ouigo and Renfe’s Avlo, if booking is done a few weeks ahead. However, if you want to take a trip next week, a flight is usually the cheaper option.

With a new climate law, France made a start by banning short-haul domestic flights that could be made by train within less than 2.5 hours. However because of the exemptions, the measure will probably only apply to one to three domestic routes, out of more than a hundred. The expected climate impact will be less than 1 per cent reduction in CO2 emissions of the French air transport sector, says Greenpeace, calling it ‘greenwashing’.

Greenpeace also notes that Germany has the greatest responsibility in terms of air traffic in Europe, as one third out of the 150 top intra-EU flight routes come from and/or arrive in Germany. Germany is also strongly represented in the top 5 of the busiest international flight routes in the EU that can be travelled in maximum 6 hours by train. For example, the international EU flight Paris-Frankfurt carries 1,042,112 airline passengers per year, while there is a train journey that takes just under four hours.

The action group also calls for efforts to be made to make travelling by train cheaper and easier than flying. This should be done by phasing out air travel subsidies and kerosene and VAT tax exemptions, decreasing track access charges, introducing social fares on train tickets, and exempting international routes from VAT (international air tickets are exempt while VAT is still applied to international rail journeys in some countries), says Greenpeace. Sharing of real-time and ticketing data should be mandatory for rail operators across EU countries.

As part of the Smart and Sustainable Mobility Strategy, the European Commission committed to make collective travel under 500 kilometres carbon neutral by 2030. However, Greenpeace says that the Commission’s proposal falls short on binding measures that will reduce air travel and shift passengers to trains in the short term. The European Commission is expected to adopt an action plan for cross border and long distance rail by December 2021, so all eyes are on them to see whether concrete actions will be made to realise a shift to rail.

How about London to Edinburgh or Glasgow? Now with CHEAPER air fares ……