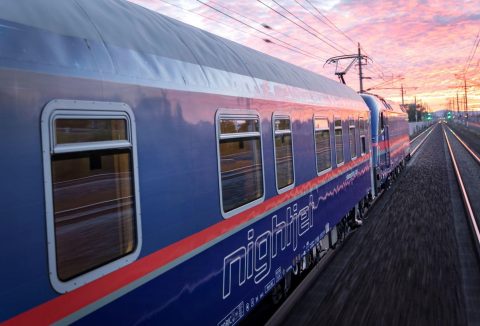 The European night train network is further expanding with the launch of two new connections from December. Passengers can now book the sleeper train Vienna–Munich–Paris. Together, Deutsche Bahn, ÖBB and SNCF will run this connection under the Nightjet name.

The connection from Vienna to Paris is one of the two first expansions of the Nightjet network announced last December by the German, Austrian, Swiss and French railways. The other connection will also run from December, connecting Zurich to Amsterdam via Cologne. In 2022, the connection Zurich – Rome will follow, in 2023 Vienna / Berlin – Brussels / Paris and in 2024 Zurich – Barcelona.

The new Nightjet will travel three times a week from Vienna to Paris from December. Every Monday, Thursday and Saturday there is a direct route from Vienna Central Station via St. Pölten, Linz, Salzburg and Munich to Paris Gare de l’Est. Departure from Vienna is at 7:40 p.m., arrival in Paris the next day at 9:42 a.m.

The connection from Paris to Vienna is offered every Tuesday, Friday and Sunday. The direct train to Paris revives the history of the Orient Express, a luxury train which ran on this connection until 2007.

In addition to the new connection Vienna – Munich – Paris, a new Nightjet will also start from Zurich via Basel and Cologne to Amsterdam when the new timetable starts on December 12. Tickets for this connection will be available from mid-October. Together, the two new Nightjet lines connect a total of 15 German cities with the European night train network.