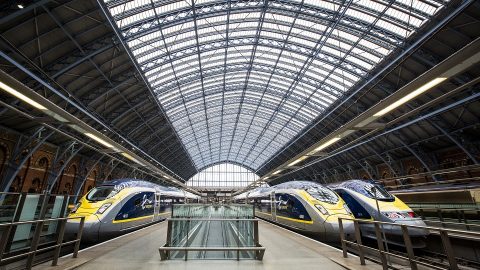 The number of Thalys and Eurostar passengers, both of which were recently rescued with loans, were on the rise before the corona crisis hit. There are many opportunities in shifting European air travel to rail, but matters such as the allocation of train paths, the high track access charges and entering the market still need to be improved, says Arriën Kruyt, board member of the European Passengers’ Federation.

The Thalys has a very healthy business case, so it is not surprising that governments and banks are investing money in it, says Arriën Kruyt. He is a former chairman of the Dutch passenger association Rover and now active at the European Passengers’ Federation as a board member. Overall, 2018 was marked by a growth of almost five percent in the number of passengers for Thalys. “In a European context, the Green Deal says that there should be less flying and and more train travel, especially on the distances on which the Thalys also operates.”

The Eurostar is in a different situation than Thalys, because the UK sold their shares earlier, and the company is mainly privately owned. The Brexit made it even more complicated, but with a 291 million euro rescue package, the future of Eurostar is also more secure. Analysis shows that the number of travelers on Eurostar also increased before the pandemic. “With fewer and fewer travel restrictions, the future for international trains looks bright”, says Kruyt. It is realistic that the growth from before corona will pick up again.

Cons of a merger

However, if it is up to the two companies, they will not remain separate carriers, they announced at the end of 2019. That will create a monopoly, says the European Passengers’ Federation, and therefore does not think it is a good thing. Kruyt illustrates this with the Amsterdam – Brussels route, where travelers can choose from three companies.

The NS with the Benelux train is cheap but slow, and the Thalys is fast but a bit more expensive. The Eurostar is just under that price, because it was in their interest to fill seats between Brussels and Amsterdam, says Kruyt. Fewer people board in Amsterdam, and a lot in Brussels.

Among airlines, there was discussion when Air France / KLM, as a state-owned company, received support and Ryanair did not. Such a discussion will also influence the discussion about Thalys and Eurostar, Kruyt expects. On the other hand, the French state is a powerful party in Europe, and has many interests in SNCF and Thalys, he says “The market opening of rail is starting to pick up a bit in France, but it is still difficult. Belgium is also not keen on market forces on the railways, so that will be a difficult discussion”, says Kruyt.

For more and better international trains, it should be possible for new carriers to enter the market, but that is difficult, says Kruyt. For example, a new company has to deal with very high demands on equipment. In addition, there are complicated regulations, such as that in one country a driver must wear a yellow vest and in another an orange one.

“It is going in the right direction however”, says Kruyt. “In the European fourth railway package it has been agreed that when a train or a locomotive is approved by one country, it also applies in Europe. At first this was very bureaucratic and cumbersome with procedures in several countries. Of course, safety requirements must be met, but this can be overdone.” This so-called technical pillar ensures that this is harmonised, it just has to be put into practice for the most part.

In addition, a train path must be designated by the rail network manager. Established carriers often already claim train paths, even though some may not be necessary. “The Eurostar also takes fifteen minutes longer than necessary because the infrastructure managers could not agree on train paths among themselves.” In that case, five parties are involved: the United Kingdom, Belgium, the Netherlands, France and the Channel Tunnel, a separate authority.

The fee for making use of the rail infrastructure is also one of the frequently mentioned thresholds, especially for international trains that have to pay it in several countries. “There has been a good discussion about this since corona”, says Kruyt. “In Germany, they have been scrapped altogether. I have the feeling that everyone understands that you need to do something about this to promote international rail transport, also after covid.”

Who can arrange that? During the corona crisis, the EU made it possible to reduce the track access charges, but ultimately the EU does not decide on this. The Member States themselves determine the amount of the fee. “However, if a large and powerful country like Germany does it, for example, there is a chance that others will follow”, says Kruyt.

There is also the initiative of the Platform on International Rail Passenger Transport (IRP), in which there is good cooperation at a high level. “These documents were recently approved by the Council of Ministers, and they contain all the current issues. That is always the beginning of a solution.”