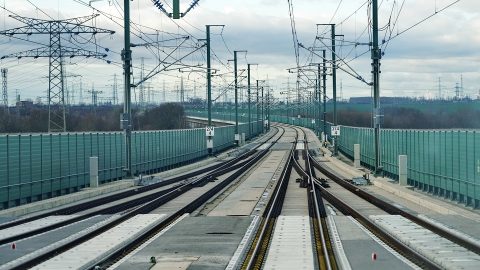 The legislative proposal aimed at facilitating a modal shift to rail in Germany will not be sufficiently effective. DB Netz is still allowed to benefit DB Fernverkehr, DB Regio and DB Cargo above other railway operators. This is the conclusion of the German Court of Audit in a still confidential report that newspaper Der Tagesspiegel has inspected.

The proposal is intended to double the number of train passengers by 2030. In addition, the share of rail in freight transport in Germany has to increase increase from 18 to 25 percent. Opening up the German railway system to more competition is one way to achieve this, authorities say. The Court of Auditors is however not convinced.

Part of the problem, according to the report, is the dual role on the part of federal government, which is both regulator for Germany’s railways and shareholder in DB. For example, while the government is responsible for regulating the rail sector, it is the sole shareholder in Deutsche Bahn (DB) that it also has an interest in ensuring that the transport company runs smoothly.

It just doesn’t work “if the boss of the Bundesliga (the German football league, ed.) is also a referee”, says spokesman for rail policy at the German Green Party Matthias Gastel in a response.

This is also reflected in the role of rail operator DB Netz. In the coming years, this subsidiary of DB will be responsible for streamlining the timetable, in order to make better use of the railways and thus realise more capacity. There are few if any obstacles to favouritism on the part of DB Netz towards any of the other DB subsidiaries, such as DB Fernverkehr, DB Regio en DB Cargo.

According to the Court of Auditors, the German Ministry of Transport has failed to build in a regulatory mechanism at the federal level on this point. As a result, the German timetable threatens to become the DB timetable, it says.

Another flaw identified by the Court of Audit is that DB Netz is not sanctioned if it impedes competition, for example by not removing bottlenecks for parties other than DB. The Court of Auditors also points to the absence of a clause preventing the railway operator from generating income, as doing so might lead to unnecessarily high access charges.

As a result, there are too many things that can undermine the actual purpose of the proposal, the attractiveness and competitiveness of the railways. Despite the shortcomings of the proposal, Mofair director Matthias Stoffregen does not think it necessary to destroy the plans. “We have to get started”. Mofair is an interest group that promotes fair competition on the railways. The transport commission of the German parliament (Bundestag) will review the legislative proposal on April 14.