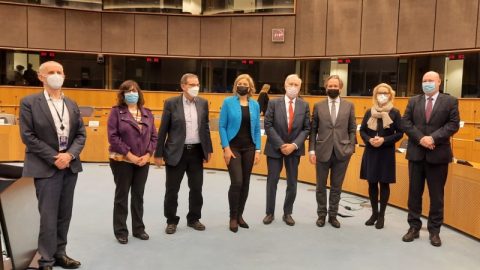 A total of 1.56 billion euros of the transport budget of the new Connecting Europe Facility (CEF) 2.0 for the period 2021-2027 will finance rail projects between cohesion countries in Europe. The Rail Baltica project will receive the majority of 1,4 billion euros. The European Parliament and Council reached a provisional agreement on the EU funding scheme last week.

Of the new round of funding, 25.81 billion euros goes to transport in the EU. The rest of the overall budget of 33.71 billion goes to digital connectivity and energy. The 1.56 billion euros for rail projects go to connections between ‘cohesion countries’, and will have priority to for the trans-European transport networks (TEN-T), focusing on missing links and cross-border projects with an EU added value.

Of the total transport budget, additional money can go to railways, but also to roads or waterways. In 2021, there is 7 billion for transport available, and projects can be submitted for this single-stage call until 19 January 2022.

All projects funded by the CEF must be in line with EU and national climate and energy plans. It was agreed that at least 60 percent of the funds will go towards actions that support the EU’s climate objectives. Current president of the European Council Pedro Nuno Santos, the Portuguese minister for infrastructure and housing, said the breakthrough agreement will allow the CEF to be launched before the summer break.

The Baltic States of Estonia, Lithuania and Latvia have been in a protracted dispute with the EU while searching for additional funds to integrate the rail infrastructure project. With Rail Baltica, an entirely new high-speed railway will connect the countries to each other and the European network. In an attempt to apply pressure and finally see the high-speed rail link connecting them with the rest of Europe, the Baltic States even threatened to block an EU funding package aiming to relieve pandemic-related effects.

In the end, the two sides reached an agreement, and the Rail Baltica project will receive 1,4 billion euros from the Connecting Europe Facility (CEF). The dispute had caused significant delay in finalising the CEF fund for 2021-2027. Now that the decision has been made, funding for other projects have also been given the green light.

Many EU officials welcomed the agreement since it brings a new era for critical European projects. Adina Vălean, European Commissioner of Transport, said that the development is crucial for creating a sustainable and agile transport system. Moreover, she underlined her satisfaction with infrastructure financing since it will facilitate cross-border transport and shift more traffic towards the rail.

On his behalf, Dominique Riquet, a member of the Transport and Tourism Committee, commented that “the EU needs to develop further and faster transport projects to stimulate growth, be more competitive and strengthen cohesion across the continent. Achieving the Green Deal will not be possible if we do not upgrade our infrastructure for the digital and environmental transition. The CEF is a necessity for Europe to achieve those goals”.

The provisional agreement is subject to approval by the Council. It will now be submitted to the Council’s Permanent Representatives Committee (Coreper) for endorsement. Once adopted by both the Council and the European Parliament, the CEF regulation will enter into force the day after its publication in the EU Official Journal. It will apply retroactively from 1 January 2021.