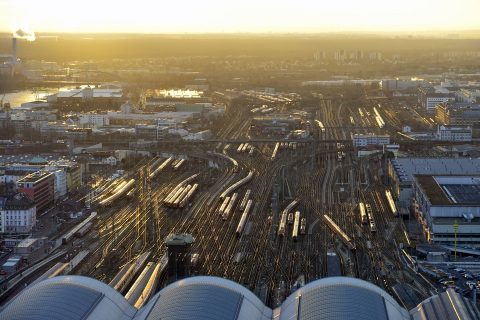 Between 2015 and 2018, the market share of rail compared to other land-based passenger transport in the EU has been stuck at around 7.8 percent. Although there has been a slight annual growth of 2.5 percent in rail traffic, a modal shift towards rail has not occurred, neither in passenger nor freight transport. These are the findings of a monitoring report of the European rail market presented in January.

Although rail traffic in terms of passenger kilometres has increased over the three-year period, on average annually by 2.5 percent for passengers and by 4.1 percent for freight between 2015-2018 in the 27 EU-countries, the market share of land-based passenger traffic remains low with just under eight percent. This is shown in the recent 7th Rail Market Monitoring report (RMMS) by the European Commission.

Passenger volumes decreased only in Bulgaria, Denmark, Slovenia, Greece and Croatia. Within total volumes, both the domestic and international segments increased. In most countries stagnating, a number of countries also reported a decrease in international passenger volumes, of which more significantly in Greece, the Netherlands and Norway. 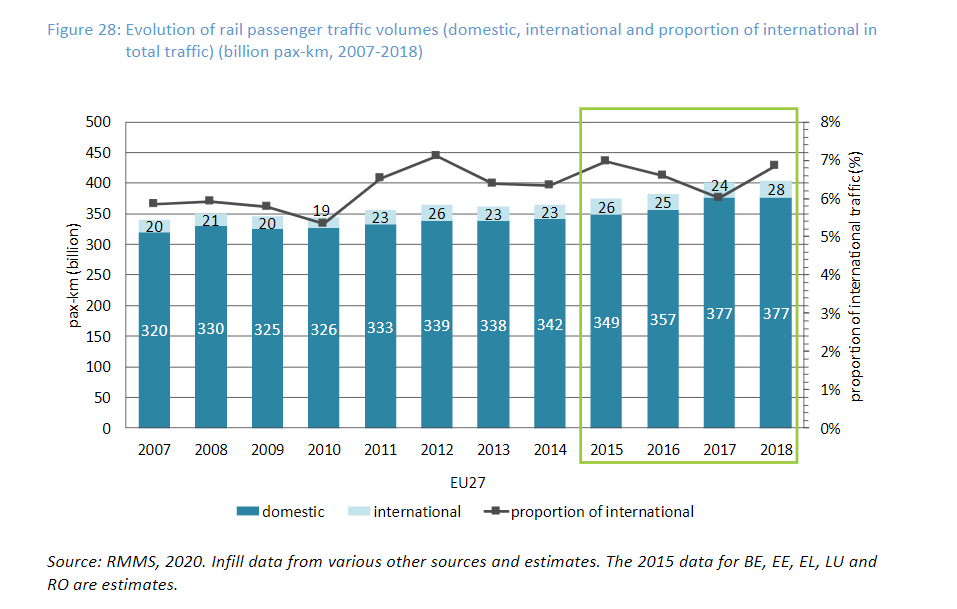 Passenger car transport dominates total passenger land transport within the EU, with a share consistently higher than 80 percent between 2007 and 2018. Throughout the same period, the rail mode share rose slightly from 7.3 percent to 7.8 percent, while tram and metro’s modal share went from 1.6 to 1.7 percent. At the same time, the modal share of bus and coach transport fell from 10.5 to 9.1 percent.

The European Shift2Rail Joint Undertaking aims to support modal shift by making rail more attractive to users. For passengers, this focuses on more travel options, more comfort and improved punctuality. As data over the last decade shows, a shift to rail is indeed not happening on its own. 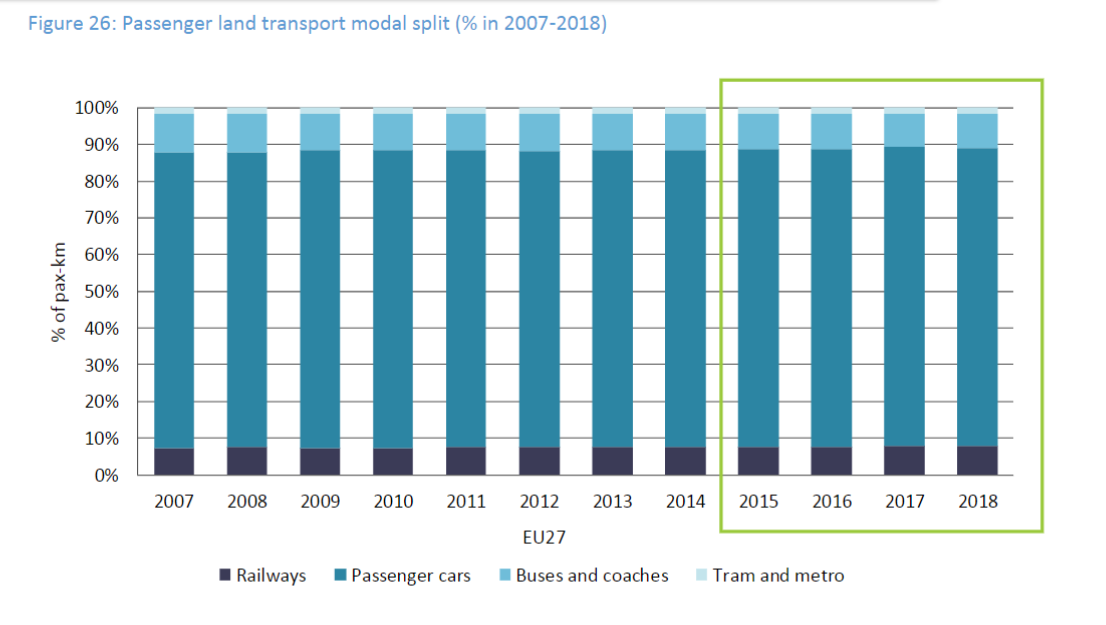 Between 2015 and 2018, rail’s modal share increased the most in Poland, Czechia, Austria and Estonia, and decreased the most in Denmark, Hungary and Croatia. Looking at each country, in 2018, Austria, the Netherlands and France were the only countries where rail had a share of more than ten percent. 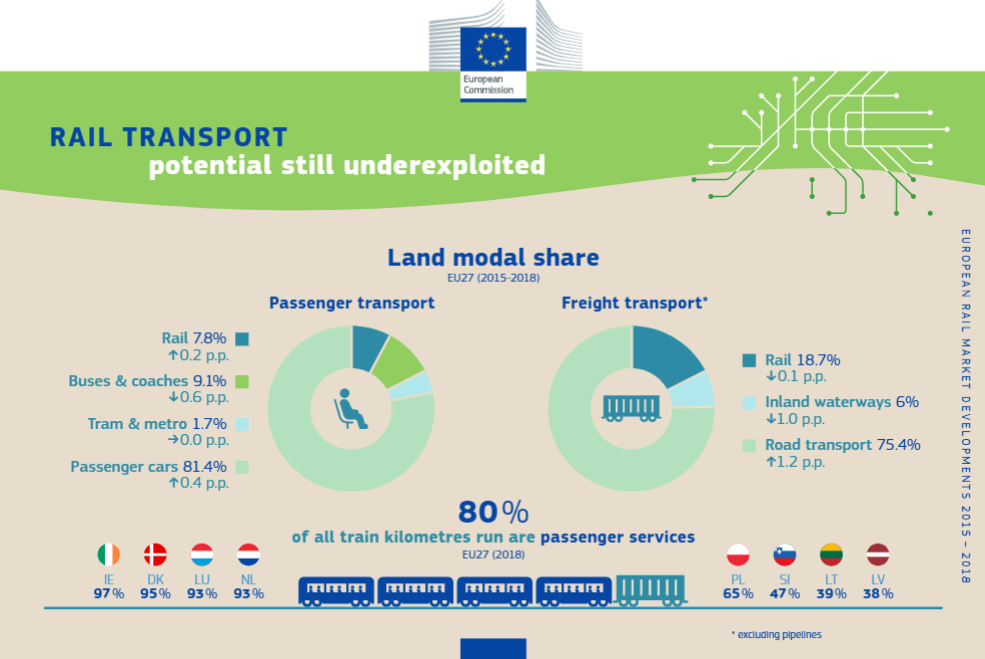 Perceived obstacles that are mentioned in a document supporting the RMMS, include the lack of easy ticketing options for passengers, the availability of suitable rolling stock, high infrastructure access charges for cross-border long-distance services and a lack of coordination in the setting-up of cross-border train paths. At the request of the European Parliament, in 2020 the Commission commissioned a study on cross-border long-distance rail passenger services, with a special focus on night train services. The results of the study, which will focus on the obstacles for the setting-up and running of cross-border passenger services, are expected mid-2021.

In most countries the volume of international train passengers stagnated, but a number of countries also reported a decrease in international passenger volumes, of which more significantly in Greece, the Netherlands and Norway. In Romania (around a staggering 100 percent) and Spain (around 50 percent) there was the most increase.

Officially, new entrants into the market have a 14 percent share of all rail passenger transport, but according to AllRail, l, the representing body for independent passenger rail companies, this is ‘whitewashing’. “If one subtracts the foreign subsidiaries of state incumbents (such as Abellio, Arriva and Keolis), what remains is only about seven percent of passenger trains run by truly independent, privately owned operators.”

AllRai calls for a European quota for the share of independent operators, saying that by 2030, 50 percent of all passenger trains must be provided by privately owned operators. AllRail President Dr Erich Forster states: ”Otherwise we face the real and serious threat of the re-monopolisation of European passenger rail. If this happens, then passenger rail will remain small and its contribution to the EU Green Deal will be a spectacular failure.”

On 30 October 2020, EU Commission Executive Vice-President Margrethe Vestager said: “Competition in the rail passenger transport sector can drive prices down and service quality up to the benefit of consumers. It benefits the environment too as travellers shift to rail in line with the Green Deal objectives.”

Fair access to the market for all operators will allow for the introduction of new, multimodal offers and increased choice for passengers and businesses. To this end, the market pillar of the Fourth Railway Package introduced competitive tendering as the standard procedure for attributing public service contracts, with a transition period until December 2023. It also opened access to commercial provision of rail domestic passenger services, starting with the 2021 timetable.