The total length of railway track that was congested in the EU has almost doubled from 2015 to 2018. In total, congestion affected 2,261 kilometres of track in the 27 countries of the EU (3,32 kilometres in EU28). More than half affected rail freight corridors: 1,339 kilometres. These numbers were presented in the 7th monitoring report on the development of the rail market by the European Commission.

The most intensively used networks in 2018 were those in western Europe, particularly in the Netherlands. The country had an intensity of use of 50.6 thousand train kilometres per line kilometre that year. Greece appeared to have the lowest intensity of use, with only 4.8 thousand train kilometres per line kilometre. “Although these broad national averages say nothing about the emptiest parts of the network, they can provide some indications about which networks are, on average, busier than others and could therefore have limited capacity for further traffic”, the report emphasised.

Congested railway tracks are a barrier for the rail freight industry in particular, as the priority in capacity allocation is often for passenger trains. The report mentions: “The services most commonly prioritised by Member States are those provided under a PSO (public service obligation), which is the first priority in 13 countries, followed by international passenger services (7 countries). Freight traffic (both domestic and international) is seldom given first priority.”

This is a problem, said Conor Feighan from the European Rail Freight Association in a broadcast of RailFreight Live last Friday. “We won’t have more infrastructure in the next five years, as this is more of a long-term project. Therefore, we need to better manage capacity, this is crucial. It will come to innovative solutions as digital capacity management and international timetabling. It is possible to improve the situation, but it is not happening by itself.” 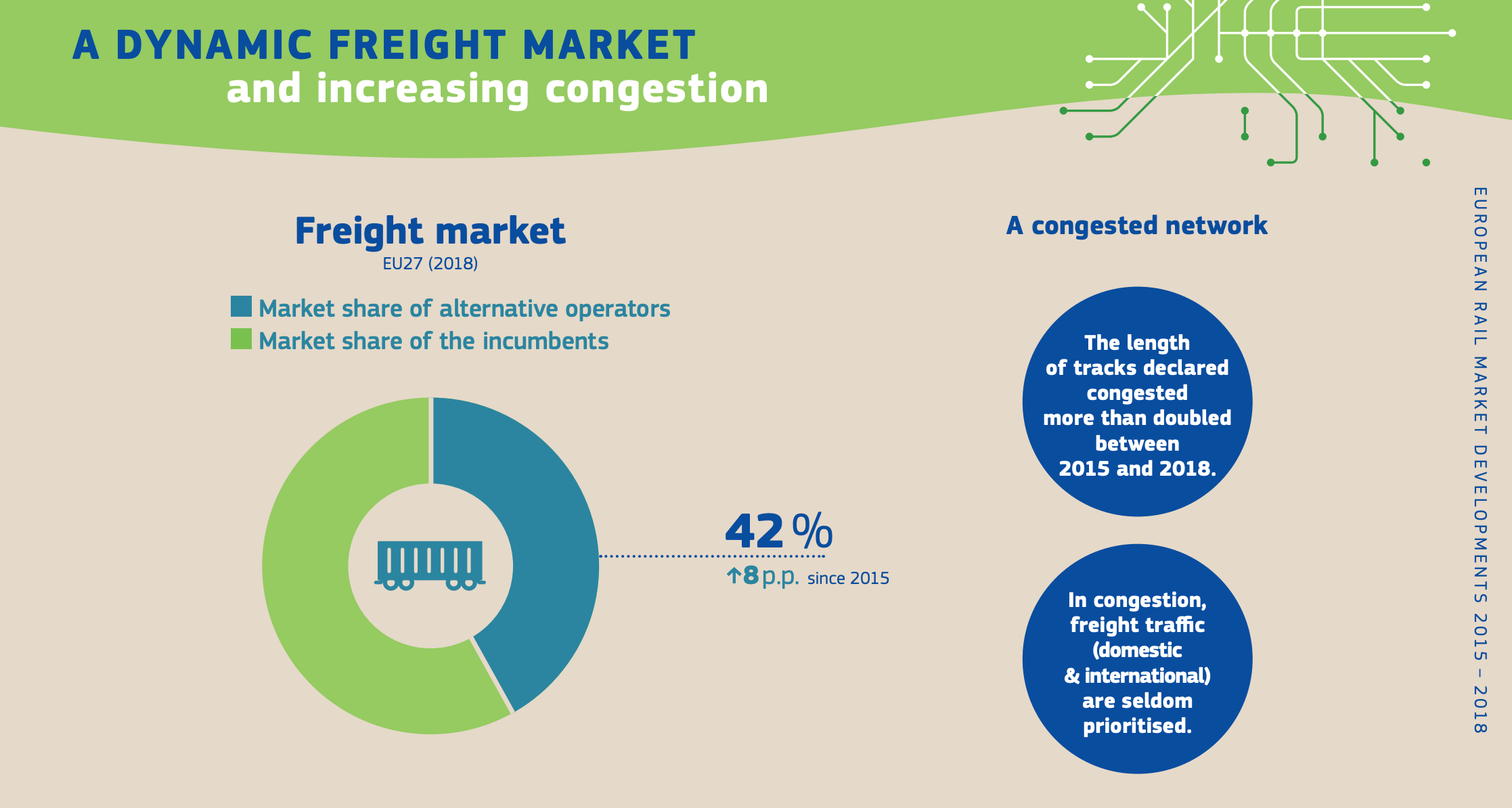 During the pandemic, the number of passenger trains on the tracks dropped down significantly, while freight traffic continued to operate. This allowed for a temporary relief for rail freight in terms of capacity availability. Suddenly, the punctuality rates improved, and the infamous rail freight delays occurred much less. It was a lesson and indicator for the industry that it is possible to improve the reliability of rail, if the capacity on the railways is managed in a better way.

Surprisingly, the punctuality levels have not dropped down as expected now that passenger trains have returned, noted Akos Ersek from the UIRR during the same show of RailFreight Live. “It is now around 70 per cent, much higher than before the crisis”, he said, clarifying that these figures are based on data provision by UIRR members, which represent a little more than half of the European intermodal sector.

“This only proves that if there is attention, it can be done. Greater efforts should be made by infrastructure managers in train path and traffic management, and then we can continue this trend.” Ersek admitted that he could not explain at this point how the punctuality levels have been accomplished.

“We will analyse these statistics, we don’t know how it was done. But it can be done, that is important. And let be clear: this is improved performance, not high performance”, he concluded. You can watch the full conversation with Conor Feighan and Akos Ersek below. (text continues below the image)

The total number of EU train kilometres (both passenger and freight train movements) has remained substantially stable over the past ten years. Passenger and freight services recovered at different paces after the financial crisis of 2008 (with fluctuations for freight). Between 2015 and 2018, rail freight traffic in the 27 EU countries increased annually by 4.1 per cent, the report states. In 2020, the figures dropped by 30 per cent due to the pandemic, but by the end of the year had recovered to normal levels.

Although these numbers are relatively positive, the modal share of rail in overall land transport remains low and even decreased in the 2015-2018 period. Between 2015 and 2018, the modal share of road in EU27 land freight transport increased from 74. to 75.4 per cent, whereas rail decreased from 18.8 to 18.7 per cent, with significant differences between countries, the report states. The modal split remains one of the biggest challenges for the rail freight industry.