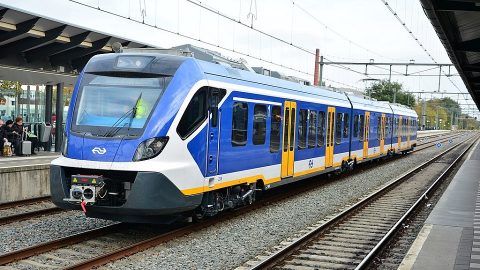 The train driver will soon be responsible for the departure process when a new Airport Sprinter will be introduced in the Netherlands. This high-frequency Sprinter will run eight times an hour between Amsterdam Central and Schiphol / Hoofddorp by 2023. Trade unions VVMC and FNV Spoor see the changed departure process as a great danger and think that this is the first step to get the chief conductor of the Sprinter trains.

The Airport Sprinter is a normal Sprinter (regional train service) that runs at high frequency. A Technically Guided Departure (TGV) process will be used for this train service, whereby the driver is responsible for closing the doors and the conductor focuses on the service to the passenger. The Airport Sprinter will soon have a frequency of six and nine minutes in between each train. Because the trains can run more punctually and faster, Dutch Railways NS expects more trains per hour to run on this busy section of the line.

“The reason for the introduction of the Technically Guided Departure process is that we will be running eight sprinters per hour in addition to the Thalys, Eurostar and other Sprinter services on this route. For that to fit properly, this Sprinter has to gain some time. We have to gain tens of seconds at every stop to get space on the track”, NS spokeswoman Carola Belderbos explains.

The rail trade union FNV Spoor also sees “major risks for employment and the content of the position in the future of the chief conductor”. According to the union, the behaviour of the passenger when boarding and alighting in particular causes a delay in the departure procedure and this is not resolved with Technically Guided Departure. In addition, investing the departure with the driver would be unsafe, which could increase the number of stop-signal passages. “During the departure, the driver has to observe and monitor both the signals and several screens. Below 40 kilometers per hour it is strictly forbidden for the driver to use the mobile and the diagnosis screen will even go black”, the union said.

According to Belderbos, the introduction of the Technically Guided Departure process only concerns the Airport Sprinter and the main conductor remains on the train. “By placing the process in the hands of one person, the risk is smaller that the departure will be delayed. This can save seconds. In addition, the conductor has more room for service to the traveller.” When asked, she denies that the change of process is a first step towards further automation.

To make the high-frequency Sprinter services possible, NS is going to make a technical adjustment to a number of new Sprinters. A request for advice has been submitted to the works council for this. With technical adjustments, the train departure process can be completely in the hands of one person and the stop time can be carried out as punctually as possible. This reduces the risk of delay and cancellation of trains. With the Airport Sprinter, the driver is responsible for the train’s departure process and is supported by technology to safely close the doors.

According to the carrier, Technically Guided Departure is an existing technique that is more often used in Europe. NS will carefully test the technology and the associated process. The railway company does this on the basis of a series of experiments and test drives, in which a great deal of attention is paid to the interaction between humans and technology. The results of this are included in implementation.

“In our view, Technically Guided Departure on the Airport Sprinter is nothing more than a testing ground for this completely new working method, which NS generally has in mind. The staff are not honestly and transparently informed by NS, but only provided with some brief information with a lot of smoke screens to conceal the real motives”, says VVMC.

In a few years’ time, large-scale work will take place on and around Amsterdam Central. Among other things, the platforms and staircases will be widened by removing the intermediate tracks, which are currently not located on a platform. NS wants to use the Airport Sprinter to keep Amsterdam and Schiphol accessible during the renovation.

“Because we have to deal differently with the capacity we have, eight Airport Sprinters will soon be running between Amsterdam and Schiphol. The IC Direct will soon be driving via the Zuidas. For Amsterdam Sloterdijk and Lelylaan, this means that they will receive a high-frequency service from Schiphol at ten trains per hour instead of six”, explains Belderbos.