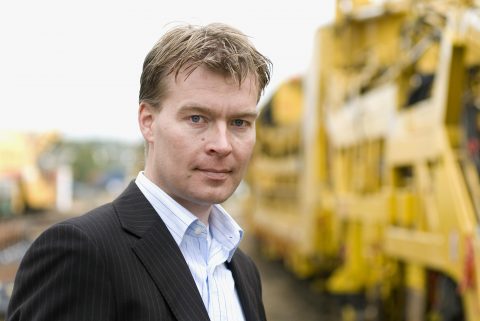 Jacob Zeeman started on Monday as the new CEO of rail solutions company Dual Inventive. Last week, Zeeman signed the contract with the managing directors, which at the time of signing consisted of Lex van der Poel and Eric Groenen. Zeeman left Strukton Rail at the beginning of October as a top executive because of a difference of opinion with Gerard Sanderink, owner and managing director of the parent company Oranjewoud and CEO of Strukton.

“Jacob Zeeman is well known to us. In his previous role as CEO at Strukton Rail, we have worked together in recent years and shared views on the rail market. We were able to take some good steps with both companies, which the market is still enjoying and will continue to enjoy”, explains Lex van der Poel of the appointment.

With Jacob Zeeman at the helm, Dual Inventive will continue its efforts to expand across borders in the coming years. The company has been active for many years in Belgium, the United Kingdom, France, Australia and is currently also preparing activities in Germany. Van der Poel: “In 2020, 90% of our turnover will come from business outside of the Netherlands. Last summer we put a lot of effort into further cooperation with infrastructure managers in the countries where we are active”.

Van der Poel points out that the shortage on the labour market in the rail market is partly being exacerbated by the corona crisis. According to him, digital techniques that increase the reliability of the railways and/or make work more efficient can partly compensate for this shortage.

Van der Poel, who has been at the helm of Dual Inventive since 2007, will remain a director of the company, but in the coming years will focus more on elaborating the vision of the technology company and will be responsible for setting out the long-term goals in the roadmap.

Co-owner Eric Groenen stepped down as director, but will remain associated with the company as shareholder. In addition to Managing Director Jacob Zeeman and Lex van der Poel, Josh Jackson, Managing Director for the Dual Inventive Limited, and Jasper Covers have also been part of the company’s management board since Monday. In addition, Dual Inventive set up the new company AnyWare B.V. this year, which is headed by Mark Damen.

Among other things, Dual Inventive have been developing and supplying products to promote the improvement of railway safety for railway workers since 2007. “Under pressure from the introduction of ERTMS, this is developing increasingly towards the integration of trackworker safety into the train signalling system”, says Van der Poel. According to him, the company’s communication platform for track MTinfo 3000 cloud could be a ‘crucial building block’ in this.

“With our new board we are ready for serious challenges within the rail market. We know Jacob Zeeman as a person with a clear vision, a person who makes connections, works with a team and sets achievable goals. Always with the aim of raising the rail market, as a whole, to a higher level. This is 200 percent Dual Inventive, so we are very happy with his arrival”, he concludes.