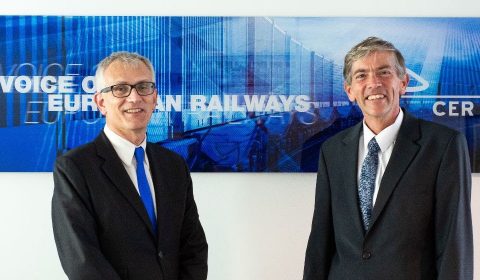 Alberto Mazzola has been unanimously elected as new Executive Director of the Community of European Railway and Infrastructure Companies (CER). He will succeed Libor Lochman and take office on 1 January 2021. He was elected by the CER General Assembly on Monday.

Before joining FS, he contributed to the worldwide business section of Leonardo Finmeccanica (1988-2002). From 2015 to September 2020, he was Vice-President of the Transport, Energy and Service of General Interest Section and President of the International Trade Agreements Follow up Committee of the European Economic and Social Committee.

CER Chair Andreas Matthä (CEO, ÖBB Holding AG) said: “With Alberto Mazzola, the General Assembly today decided for an outstanding expert not only in EU policy making but also in the European rail business. I am confident that he will strongly represent Europe’s rail sector towards the European institutions and successfully position rail as the backbone of Europe’s future sustainable mobility plans. The Executive Director will also focus on the current COVID-19 challenges working hard with members to regain customer trust.”

“With his deep knowledge of the railway system, Libor Lochman has immensely contributed to the work of CER over the last 15 years, first as Deputy Executive Director responsible for technical affairs, and as of 2011 as its Executive Director. Let me highlight that thanks to his relentless efforts, the finalisation of the Fourth Railway Package has been a stepping stone for the creation of the Single European Railway Area. An era is coming to an end and CER thanks him for all his achievements.”

“I am extremely happy that Alberto Mazzola has been appointed today as the next CER Executive Director. We have been working together for years and I know he is recognised by all rail stakeholders as one of the top lobbyists in the EU rail community,” CER Executive Director Libor Lochman said in response to the election.

“He will have the chance to start his mandate with the kick off of 2021 as the Year of Rail and with a freshly published EU Strategy on Sustainable and Smart Mobility: I am sure he will be able to use this historical moment to confirm CER as a key player in the definition of the future EU mobility policies. I look forward to working with him in the upcoming weeks to ensure a smooth change of leadership here in Brussels.”

Incoming CER Executive Director Alberto Mazzola: “I will work to support, with the relaunch of Europe after COVID-19, the full recovery of passenger and freight transport by rail, as well to promote new policies to boost rail. With the 2021 European Year of Rail we will bring citizens, railway workers, social partners, businesses and European youth closer to the public debate on EU Sustainability and Mobility policies.”